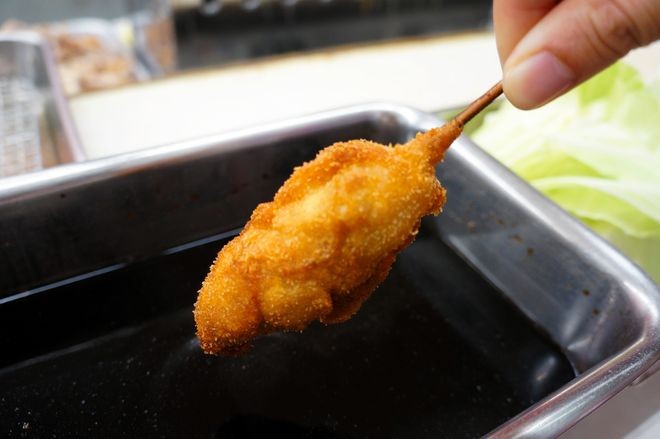 A can of sauce for “kushikatsu.” Double dipping is a no-no. (Asahi Shimbun file photo)

At Daruma, a famed restaurant in Osaka’s busy Dotonbori district, the No. 1 rule has been: “No double-dipping.”

The restaurant serves “kushikatsu,” or deep-fried skewered cutlet, which customers, often strangers, dip into a shared silver-colored can full of special sauce on a table.

But such an intimate and folksy setting is a no-no for restaurants under new guidelines set by the Japan Foodservice Association and other restaurant business and sanitary officials.

Daruma reopened in mid-May after a one-month shutdown during the state of emergency issued over the COVID-19 pandemic.

However, returning fans of the Osaka specialty dish found that the dipping tradition, which had continued since the business was established in 1929, was gone. The silver-colored cans full of Daruma’s family-secret sauce were nowhere to be found.

Instead, customers were asked to sit a safe distance apart and each use an individual bottle of sauce to pour directly over the kushikatsu or on the side of the plate.

The restaurant no longer needs to “admonish” customers for their double-dipping misbehavior.

The change has even affected Daruma’s beloved mascot, a tough-looking guy in a chef coat named “daruma minister,” who still stands outside the restaurant with a sign asking customers not to double-dip.

But when restaurant staff joined a June 2 promotional event with other businesses that had reopened in Dotonbori, the minister’s message was much toned-down: “Please drizzle our no-double-dipping sauce and eat.”

“Customers’ safety is our No. 1 priority,” a restaurant representative said about the decision.

Customers have the option of ordering a small can of sauce for 100 yen ($ 0.94). Any leftover sauce is tossed out.

An Osaka woman in her 30s welcomed the new system, saying: “I like it because it’s easier to adjust the amount of sauce. And I have a thing about cleanliness.”

The restaurant, however, hopes to bring back the old tradition “once the virus pandemic is over,” the representative said.

Hiroki Ko, a 61-year-old editor who knows a lot about food in the Kansai region, cannot wait for that day.

He said pouring sauce on kushikatsu instead of dipping is like “cooking ‘okonomiyaki’ on an electric hot plate instead of a cast-iron grill.”

The idea for strangers sharing a dipping sauce stems from the nature of people in Osaka, who do not want to waste expensive sauce, Ko said.

“Chefs deep fry kushikatsu in front of customers, customers dip it into the sauce with a splash to cool it down, and then dig in,” Ko said. “Kushikatsu is not simply a food but an experience of a series of actions.”

Up north in Iwate Prefecture, a local specialty dish also went through an adjustment phase because of the pandemic.

A server stands close to a diner and throws a small serving of the noodles in a small bowl while calling out words of encouragement.

The dining experience has been very popular among tourists, who often take up the challenge of wolfing down as many bowls of noodles as possible.

But during the pandemic, many wanko soba restaurants stopped offering the dish.

Azumaya has a 113-year history of serving wanko soba noodles. Its main location in the prefectural capital of Morioka had taken the noodles off the menu for nearly two months until June 19.

Before resuming its wanko soba operation, the restaurant and similar businesses prepared guidelines to prevent the virus from spreading.

Customers were asked to pour the noodles into a bowl themselves. The price was cheaper than the usual wanko soba offering.

Some imbibers are also having to change their ways.

Before the coronavirus pandemic, “kakuuchi” had become a booming business nationwide.

It is typically a small area within and operated by a liquor store. Customers stand close to each other to drink sake bought there at reasonable prices.

Liquor store operator Imadeya closed several kakuuchi spots in late March. One of them, located inside JR Chiba Station, reopened in late May.

The place used to host up to 20 people within 33 square meters before the new coronavirus outbreak.

Now, only six customers are allowed inside at a time.

Kosei Ueno, 57, a chief editor of food-themed magazine dancyu, is alarmed by the pandemic’s impact on the restaurant industry.

“Japanese food culture is facing a crisis,” he said.

Even high-end restaurants have started offering takeout and using social media, he said.

“But there are many restaurants that are not accustomed to such contemporary methods,” Ueno said. “Even long-established businesses since the Edo Period (1603-1867) can go out of business.”

He also sees a possible shift in dining culture, with more people avoiding dining in big groups and instead eating and drinking alone.

(This article was written by Itsuki Soeda and Masayoshi Hayashi.)