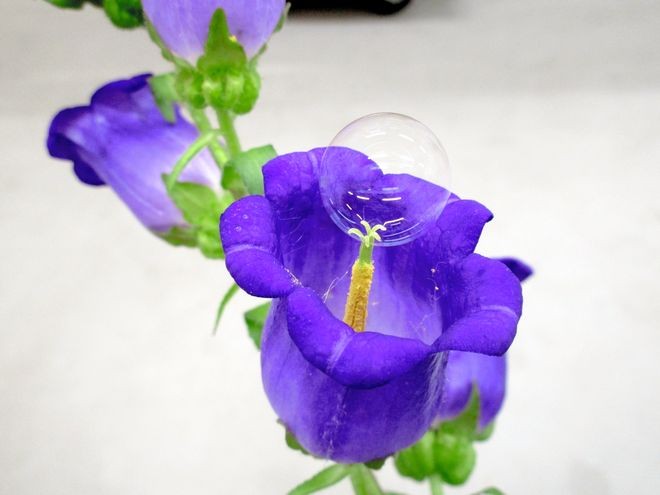 A campanula flower whose pistil is pollinated by a soap bubble (Provided by Eijiro Miyako, an associate professor of bionics at the Japan Advanced Institute of Science and Technology)

NOMI, Ishikawa Prefecture--Pollen-bearing soap bubbles floating over orchards and farms may sound like fantasy, but such scenes could soon become reality.

The seemingly futuristic method of airborne pollination is the brainchild of the Japan Advanced Institute of Science and Technology here.

Trees and plants have already yielded fruit using this method, according to the institute.

Honeybees, which normally perform the job of pollination as they roam from plant to plant coated in pollen, are in decline across the world, along with many other insect species, due to climate change and intensive use of agrochemicals.

Farmers often apply pollen to plants by brush and with other tools, a process that is time-consuming and costly.

A team headed by Eijiro Miyako, an associate professor of bionics at the institute, tested types of soap to gauge which worked best for pollen to maintain pollination ability and determine the most suitable concentration of soap for the procedure.

The researchers added calcium, potassium and other substances to promote the activity of pollen and find the optimum liquid mix.

After soap liquid was mixed with pollen, the researchers directed bubbles from the finished agent toward the pistils of pear flowers and examined pollination ratios over time.

The results showed that the soap bubble method’s success rate is the same or higher as when spraying techniques are used to pollinate pistils.

Tests at the pear farm found that trees bore fruit as frequently as when artificial pollination was done by hand.

The quirky idea of soap bubble pollination was born by chance. Miyako, 40, initially tried using a drone mounted with pollen-applied horsehair, but found the rotating propellers could damage flowers.

On holiday three years ago, Miyako watched a soap bubble break on the face of his kindergarten-age son while they were playing at a park near his home, and had, as they say, his eureka moment.

Miyako began to toy with the idea of experimenting with a material with a thin membrane to carry the pollen. From experience, he knew soap bubbles can spread widely. Also, their round shape can easily reach pistils and causes no damage to plants.

Miyako said his goal is equipping a GPS-fitted drone with a device to release soap bubbles on plants across a wide area to pollinate them.

But he's not out of the woods, yet, as there is still the challenge of bubbles bursting if they come into contact with the drone's propellers.

Rain and wind are another consideration as they would prevent soap bubbles from pollinating flowers.

“How to improve the successful pollination ratio is an issue I still need to figure out before moving on to the commercial aspects of this research,” Miyako said.

Still, he has high expectations of success.

“The same artificial pollination system can be used for any sorts of flowers, so the technology has huge potential,” Miyako added.

The researchers' findings were published June 18 in the online scientific journal iScience, which is released by U.S. academic publisher Cell Press.