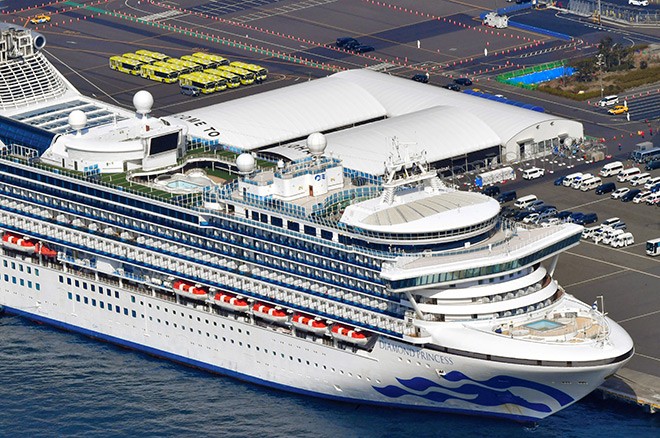 The Diamond Princess cruise ship under quarantine at the Port of Yokohama on Feb. 20 (Asahi Shimbun file photo)

The mass COVID-19 outbreak aboard the quarantined cruise ship Diamond Princess proved to be the single most influential factor in heightening the public's vigilance against the risk of infection, a study shows.

Online research by the University of Tokyo’s Institute of Medical Science found that almost one-quarter of people answering a questionnaire cited the conditions on the vessel in February that were widely covered by the media.

The March 26-28 survey targeted 11,342 men and women between the ages of 20 and 64 on measures they took to avoid being exposed to the virus.

Eighty percent replied that they avoided circumstances that met what is referred to in Japan as the 3Cs: confined and crowded spaces and close contact with others.

Asked their primary motive for taking such preventive measures, 23.2 percent cited the cruise ship that eventually departed from the Port of Yokohama after more than 700 passengers and crew members were infected.

Kaori Muto, a professor of medical sociology at the University of Tokyo who published an academic paper based on the research, said the cruise ship incident made the nation far more aware of the virus than countries in Europe and the United States even though Japan had few cases of infection back then.