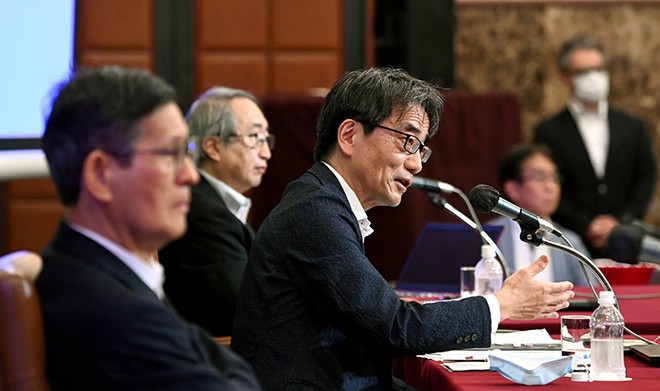 Members of the government's expert panel on the novel coronavirus hold a news conference at the Japan National Press Club in Tokyo on June 24. (Takuya Isayama)

The Japanese government announced June 24 that it will scrap its current expert panel on its response to the COVID-19 pandemic and replace it with a new entity.

The news took the current panel by surprise, with at least one member saying that he was not notified about it in advance.

Yasutoshi Nishimura, the minister in charge of measures to combat the novel coronavirus, said the step is intended to prepare for a “second wave” of infections by enlisting experts from broader areas, at a news conference in Tokyo announcing the move.

Nishimura stressed the need to strike a balance between stemming the contagion and allowing the country to remain open for business.

Government officials said the announcement was moved up to the evening of June 24 after originally being scheduled for June 25.

The current panel will be replaced shortly by a new entity that in addition to medical specialists will include local officials and communications professionals.

The new entity is expected to hold its first meeting in July.

The current panel was formed in February when the government was scrambling to deal with outbreaks of infections on the Diamond Princess passenger ship docked at Yokohama Port.

It was composed of 12 specialists of infectious diseases and pubic hygiene, led by Takaji Wakita, director-general of the National Institute of Infectious Diseases.

When the panel began its work, it lacked a legal basis as the revision of a special law was not passed until March by the Diet to respond to the new coronavirus health crisis.

Nishimura acknowledged at the news conference that the current panel’s position was not legally solid and added that the new entity will be established based on the revised special law.

In addition to analyzing the spread of the virus, the existing panel also recommended measures to bring the disease under control, including the expansion of the testing system and calling on the public to avoid crowds in confined places with poor air circulation.

The government placed a premium on the panel’s opinion at critical junctures battling the outbreak when it mulled issuing or lifting a state of emergency over the health crisis.

The government's apparent deference made the panel appear in the driver’s seat, drawing criticism that the division of roles between it and the government was unclear.

The current panel conceded at a separate Tokyo news conference following Nishimura’s announcement of its disbandment that it projected the image that it had compiled the government’s response to the disease.

Panel members said the group’s duties should be strictly limited to analyzing and assessing the extent of the pandemic to report its findings to the government.

They added that the government should take the lead in communicating risks related to the outbreak with the public.

(This article was written by Tomohiro Yamamoto and Naoyuki Himeno.)