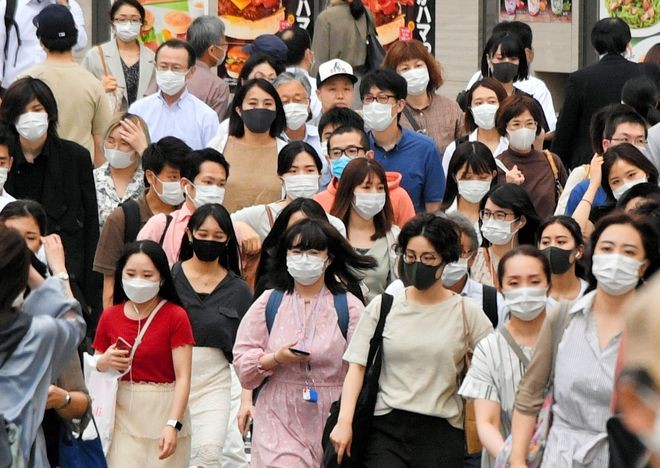 The past six months are beginning to exact a heavy toll on Japanese fed up to the teeth with new social strictures to combat COVID-19 and relentless media coverage of the health crisis.

Posts on social media such as "#sick of coronavirus" offer an insight into the overall state of the nation's mental health and the exhaustion people are feeling from increased pressure to conform.

For some, it's simply having to don face masks every day that frustrates them most. Others say they can no longer endure the flood of media reports on the virus.

Naoki Sato, a professor emeritus of social studies at the Kyushu Institute of Technology, offers this advice to those who are stressed out: Don't bottle up your feelings.

The best way to cope with stress is to first acknowledge its existence and then share your anxiety with others, Sato said.

"Acknowledging first that you're feeling under pressure relieves anxiety," Sato added. "Your friends may be feeling the same, so you share your problems with them through the internet and by other means."

NEVER WITHOUT A MASK

Sometimes, it's the little things that trigger inner turmoil.

For example, on one evening in mid-May, a 41-year-old company employee in Saitama Prefecture was about to pull into a convenience store on his drive home when he suddenly realized he didn't have a face mask.

Even though he was desperate for something to drink, having just finished exercising, he drove on without stopping as he realized "the store's staff might not appreciate me coming in without a face mask."

The man admitted that he hates wearing masks because they restrict his breathing. But seeing as just about everyone these days wears one, he feels obliged to conform on a daily basis.

Although he understands the importance of wearing a mask in public, the man confessed to having posted anonymously on Twitter that, "To be honest, I don't want to wear masks anymore."

The outbreak has also altered how people ride on trains. Passengers who previously were used to being packed nose to nose during their commute are now encouraged to keep their distance from each other except during peak rush hour periods.

One person on social media described the now-common sight of passengers striving to stay as far away as possible from one another due to "a tacit rule forcing passengers to leave a space between others."

Another wrote of feeling "disappointed in myself when I find I'm uncomfortable about someone sitting next to me."

A 40-year-old man from Ibaraki Prefecture who takes the train to his Tokyo office found that all of the passengers he saw in his carriage during the one-hour morning commute were wearing masks.

The man said peer pressure was the only reason he wears a mask.

"I worry what others may think of me if I don't," he explained.

The man also railed against living in "a society that continues to be a place where no one can remove their masks."

However, he keeps his true feelings to himself as he fears that he may be criticized as "eccentric" or "self-centered."

Even so, he found that he can maintain sufficient distance from others on his short walk home from the station and doesn't feel compelled to wear a mask on the way despite the fact that everyone else taking the same route wears one.

"Masks should be used only if necessary, but I feel simply arguing that probably wouldn't be accepted these days," he said.

BLAME THE MEDIA OR THE CULTURE?

For one Tokyo woman in her 30s, the media's blanket coverage of topics related to the virus is what causes her the most anxiety.

Like many others, the woman started teleworking at home in March as a precaution implemented by her company to reduce the risk of catching the new coronavirus.

Now, instead of frequent trips to the supermarket, she purchases food and other daily items online. She had been looking forward to traveling overseas during the Golden Week holiday period in early May but canceled her trip due to the outbreak.

Confronted by endless TV shows criticizing people who failed to wear masks or observe social distancing, the woman became fed up with what she saw as a condescending effort to force her to conform.

In late April, she said she could not help but post her true feelings on Twitter under the hashtag "#sick of coronavirus." The hashtag, which she accompanied with a post complaining "TV programs are dominated by coronavirus issues," quickly went viral.

Rather than blame the media, Sato suggests that the peculiar structure of Japanese society lies behind the increased anxiety.

Specifically, Sato cited Japan's myriad tacit "rules" that govern social behavior as stress-inducers, such as a common belief that "funerals should not be held on certain days viewed traditionally as ominous" and "gifts must be sent in return when receiving presents from someone."

None of these strictures have anything to do with the virus, he noted.

Pressure to conform and be part of the group are deeply intertwined with the way people live in communities across the nation with an ingrained sense of social ostracizing if one steps out of line, Sato went on.

"Now that wearing masks and living in a way that will help prevent the virus from spreading are included in the rules, people are feeling stressed, exhausted and sick of the daily pressure they face to observe these norms," Sato said. "That is only natural."