ANA sanitizes aircraft fleet as it moves to resume services

Staff not only clean the interior but also wash the exterior of All Nippon Airways Co. aircraft at Tokyo’s Haneda Airport before resuming full operation. (Ryo Ikeda) 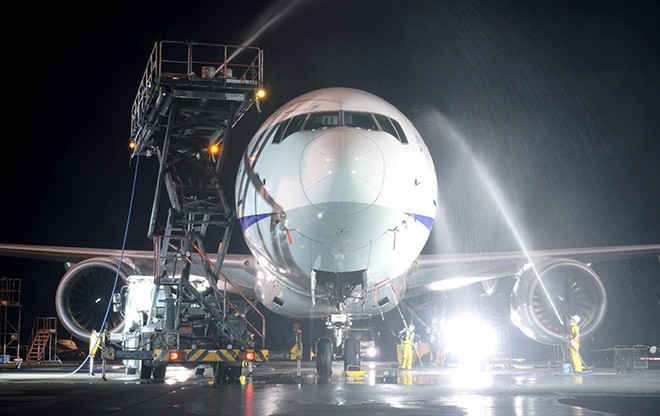 A Boeing 777 jet is hosed down at Tokyo’s Haneda Airport on the evening of June 24. (Ryo Ikeda)

All Nippon Airways Co. is moving to spray down its entire fleet of aircraft as it prepares to put more aircraft in operation following a suspension of services due to the COVID-19 pandemic.

Ten or so workers spent about three hours cleaning the exterior of a Boeing 777 passenger aircraft with hoses, mops and brushes at Tokyo’s Haneda Airport on the evening of June 24.

The roughly three-hour procedure to thoroughly clean an aircraft inside and out was conducted under illuminated floodlights.

The airline said it is sanitizing one aircraft each day to prevent the spread of COVID-19 among the cleaning staff.

The aviation industry is one of the sectors hit hardest by the outbreak, since airlines were forced to cancel scores of flights due to travel restrictions.

But now, as the economy slowly picks up again and people begin travelling, airlines are gradually seeing an increase in passengers.

At one point, ANA was only operating about 15 percent of its domestic fleet. But the company said it expects the figure to rise to around 50 percent in July.