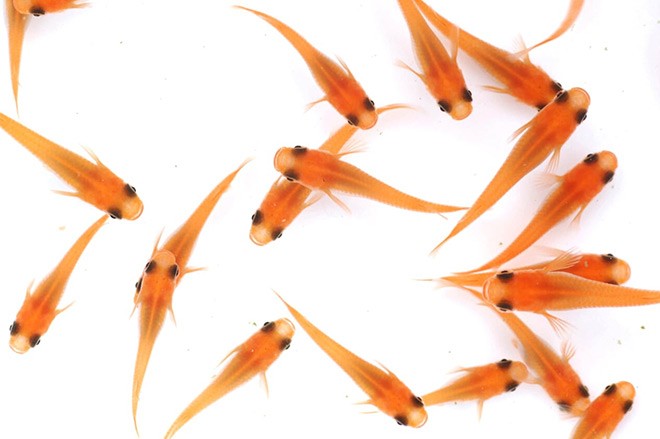 The Yokihi variety of "medaka" killifish (Provided by Medaka no Yakata)

Striking in the dead of night, thieves are targeting aquariums in Saitama Prefecture near Tokyo and making a killing selling tiny "medaka" killifish to private collectors.

Some specimens can fetch tens of thousands of yen each.

Saitama prefectural police estimate the thieves have raked in millions of yen, but say the figure could be much higher because they do not know how many fish or which specific valuable varieties have been stolen.

Crossbreeding of killifish has produced hundreds of new varieties, including one known as the “Black diamond” that can fetch 15,000 yen ($140) for a single specimen.

The rash of thefts is concentrated in Saitama Prefecture.

Sayaka Matsui, 20, the owner of Chura Medaka, a shop in Saitama city that sells a wide range of medaka, discovered in March that about 1,000 medaka she had been raising in 78 aquariums were gone.

She reported the theft to the Omiya Police Station. Matsui estimated her total loss at several million yen because some of the medaka included the tricolored Miyuki variety, one of which can fetch tens of thousands of yen.

Saitama prefectural police said they had received 52 reports of medaka thefts by June 15, not only from store owners but private individuals who found their pet medaka gone from their backyard aquariums.

The thieves generally wait until after dark to pilfer the fish. In one instance, more than 200 medaka were filched.

Saitama police only started keeping records of medaka thefts from this year due to the large number of reports, so they have no idea how many fish were stolen last year.

The thieves who targeted Matsui’s facility were clever to avoid security cameras installed to cover the front of her shop. The aquariums she uses to crossbreed medaka are kept outdoors toward the back of her establishment and she was careful not to divulge its location even to customers because she constantly worried about theft.

“There have been cases where a few medaka were taken but never have so many been stolen in one go,” Matsui said. “I am in shock because I raised the medaka from fry.”

She added that she has heard about similar thefts from nearby shops as well as from private homes. She is now in the process of installing more aquariums to breed more medaka.

The Saitama prefectural police headquarters issued a warning to local police stations earlier this month to be aware of the rash of medaka thefts.

“It is quite possible that the actual figure in losses could be much higher because so many cases have not been reported," said Wataru Fujiki, a police officer handling the matter.

He also recommended placing gravel around the aquariums, so anyone walking over the stones would make a noise.

The popularity of the fish has grown along with the crossbreeding of new, more colorful varieties, according to the Japan Medaka Association, based in Hatsukaichi, Hiroshima Prefecture.

In 2004, the Yokihi variety with a vermillion color named for a famed ancient Chinese consort triggered a frenzy of buying among the public.

Similarly, the shiny Miyuki variety that debuted in 2007 sent medaka prices through the roof.

Countless individuals are trying their hands at crossbreeding, and there are now 600 or so varieties to choose from. Many outlets sell their medaka over the internet.

A single fish can command hundreds of thousands of yen, depending on its rarity.

Toshiro Tamai, 71, operates a medaka shop in Matsuyama on the island of Shikoku in central Japan.

In 2018, about 50 of his Black diamond variety sold at his store were stolen.

In June of that year, a man was seen using a flashlight at night to scoop up the medaka from the store aquarium with a net. An acquaintance of Tamai grabbed hold of the suspect, who was arrested by Ehime prefectural police.

The man later admitted to taking the Black diamond medaka, which prompted a second arrest.

In that same year, Tamai experienced a rash of thefts of showcases containing medaka. Often the empty showcase was later quietly returned to the shop.

“I went beyond feeling sad and was bewildered,” Tamai said. “I have given up on the many small thefts that happen so often.”

In June 2019, a man who was arrested on suspicion of stealing 20 expensive medaka from a breeding farm in Sano, Tochigi Prefecture, told police, “I wanted to raise my favorite medaka.”

Yukio Oba, 65, who heads the Japan Medaka Association and operates his own medaka shop in Hatsukaichi, said some of the thefts may be intended for resale of expensive medaka.

He said “greater attention is being placed on admiring medaka at home, especially during the novel coronavirus pandemic” when people are being asked to refrain from leaving their homes.