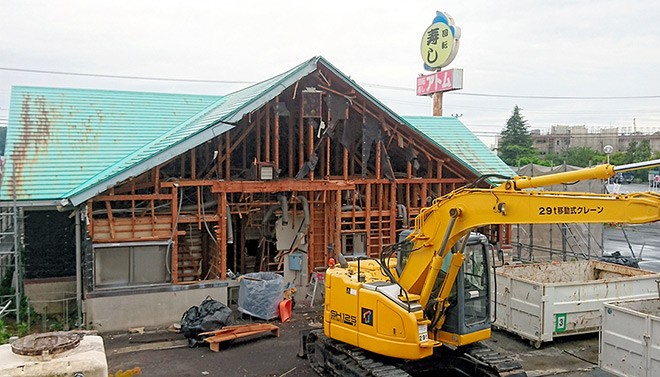 TOMIOKA, Fukushima Prefecture--Work is almost complete on demolishing a conveyor belt sushi restaurant here that garnered international attention because of its eerie connection to the 2011 nuclear disaster.

Inside “Kaitenzushi Atomu,” located in the center of town, pieces of broken dishes were still scattered on the floor in mid-June.

Plates and teacups on tables for 30 or so people remained untouched after more than nine years.

Because “Kaitenzushi Atomu” can translate as "Atomic Conveyor Belt Sushi" in English, visitors and news media treated the restaurant as a symbolic relic of the disaster.

Many overseas visitors dropped by, drawn by online posts that covered the restaurant.

In fact, the restaurant’s name had “nothing to do with nuclear power,” its owner has revealed. Rather, it was named after a Nagoya-based food company that used to have a franchise agreement with the restaurant.

The restaurant in the town that hosts the Fukushima No. 2 nuclear power plant operated by Tokyo Electric Power Co. had been left deserted since the triple meltdown at the Fukushima No. 1 nuclear plant 9 kilometers north in the neighboring towns of Okuma and Futaba.

But all traces of the eatery, once packed with locals, will soon vanish.

Between the gray construction sheets that covers the restaurant, workers could be seen tearing down walls and exposing the building's skeletal frame.

In Okuma and Futaba, another structure has gone through a dismantling process: TEPCO's Fukushima No. 1 nuclear power plant.

Tomioka's residents, including the owner and customers of Kaitenzushi Atomu, were forced to evacuate after the nuclear disaster triggered by the magnitude-9.0 Great East Japan Earthquake and tsunami in 2011.

The restaurant had no choice but to shut down after the evacuation order was issued.

Kaitenzushi Atomu's owner, Narumi Sato, 56, lived in multiple locations as an evacuee, moving in and out of the prefecture.

Sato started operating the restaurant about 20 years ago.

The owner continued to pay the lease on it, despite leaving it empty after the disaster, in the hope that the presence of the restaurant’s building would help keep memories of the catastrophe alive.

The evacuation order was lifted in April 2017 for most of Tomioka.

Sato held on to the restaurant then with the idea the sight of it would remind returning residents of how things were before and during the disaster.

But a year ago, as the rebuilding of Tomioka progressed, Sato decided to demolish the restaurant.

“I've heard positive things from people in town more and more and have come to view the old building as a detriment to the reconstruction process,” Sato said.

Sato now runs a yakitori restaurant in Iwaki, a city 35 km away from Tomioka.

He said Tomioka's residents had co-existed and co-prospered with nuclear power plants by believing the nuclear “safety myth” propagated by the central government and utility operators.

“I wanted to tell people that once an accident occurs, the place becomes unlivable. I feel a little bit lonely, but I believe the restaurant fulfilled its role,” Sato added.