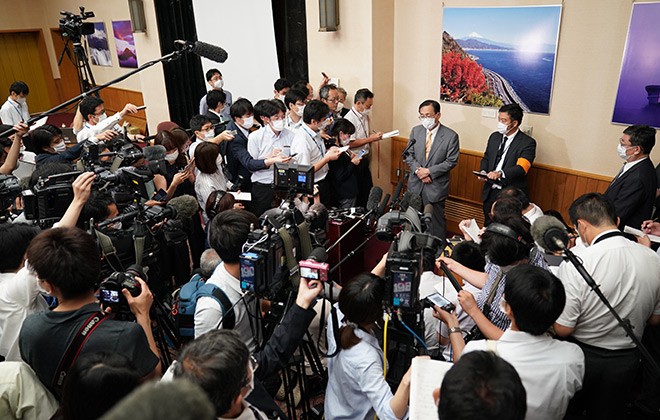 A wrench was thrown into plans by Central Japan Railway Co. (JR Tokai) to begin operating its long-awaited high-speed Linear Chuo Shinkansen Line in 2027 after the governor of Shizuoka Prefecture made an unexpected demand.

JR Tokai officials had long considered the end of June as the absolute deadline for starting preparatory work within Shizuoka Prefecture for the humongous civil engineering undertaking of constructing a tunnel under the Southern Japan Alps.

But Kawakatsu said he could not allow work to begin without first reaching agreement with JR Tokai on the environmental impact of such a massive engineering project.

Shizuoka prefectural officials raised concerns that tunneling through the Alps would affect water flow along the Oigawa river system which supplies local households and nourishes the tea fields for which Shizuoka is famous.

JR Tokai had planned to start operations between Shinagawa Station in Tokyo and Nagoya Station along its Linear Chuo Shinkansen Line in 2027.

The magnetic levitation, or maglev, train that would be used on that line is designed to reach speeds of up to 500 kph. It would connect Shinagawa and Nagoya in just 40 minutes.

The Shizuoka section under the Southern Japan Alps stretches about 8.9 kilometers and is the only portion for which work has yet to start.

Under the rivers law, the consent of the prefectural governor is required before any construction work can begin. The Shizuoka section presents some of the most arduous obstacles to overcome, and the work is already three years behind schedule.

During the meeting, Kawakatsu explained a prefectural ordinance that calls for the signing of an agreement on environmental protection before signing off on such a project.

The likelihood of an agreement being reached by the end of June is practically zero, according to Shizuoka prefectural officials who cited the need for discussions on the issue by a panel of experts set up by the prefectural authorities.

After the meeting, Kawakatsu told reporters he could not consent to the start of the preparatory work because it was so closely tied to the actual tunnel construction project.

The preparatory work would involve constructing work areas ahead of tunneling.

Officials with the Ministry of Land, Infrastructure, Transport and Tourism expressed concern about the wide gap between JR Tokai and the Shizuoka prefectural government, and set up its own panel of experts to evaluate how construction would affect the water flow of the Oigawa river.

Any delay in starting operations between Shinagawa and Nagoya would have wider ramifications for the Linear Chuo Shinkansen Line project as JR Tokai intends to eventually extend the line beyond Nagoya to reach Shin-Osaka.

The company had envisaged a 2037 start at the earliest for the extension to Shin-Osaka, but a delay in construction work in Shizuoka will almost certainly push back that timetable.

In 2016, the Cabinet of Prime Minister Shinzo Abe approved a loan of 3 trillion yen ($28 billion) from the government’s Fiscal Investment and Loan Program to JR Tokai, which plans to shoulder the expected total cost of the Linear Chuo Shinkansen Line project of 9 trillion yen.

The loan was intended to help JR Tokai push forward with the planned start of extended service to Shin-Osaka from the original date of 2045 to 2037.

JR Tokai also wanted a 2027 start to the maglev line because it is still reeling from the huge drop in passengers on its Tokaido Shinkansen Line due to the novel coronavirus pandemic.

It remains to be seen when or if the Shizuoka prefectural government will give a nod to the project.

Aside from the crucial issue of an environmental impact assessment, no obvious benefits will accrue to Shizuoka from the new maglev line. The line will cut across seven prefectures, but Shizuoka is the only one where no station is planned.

(This article was compiled from reports by Sho Hatsumi, Junichi Miyagawa, Takafumi Yabuki and Ryo Aibara.)