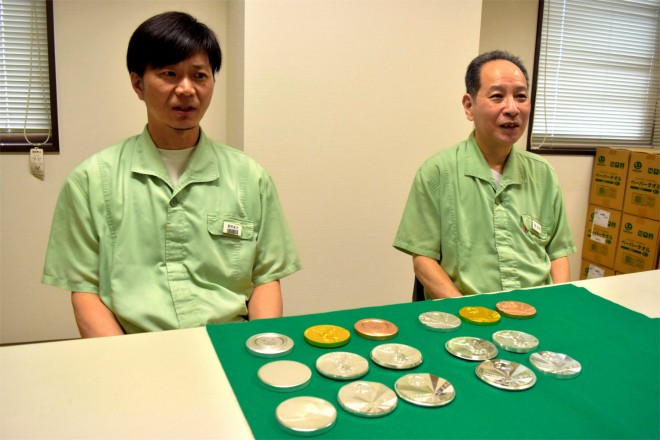 Shota Tomioka, left, and Kazuya Saka play a central role in making medals for the 2020 Tokyo Olympics and Paralympics at the Japan Mint in Osaka's Kita Ward. (Kota Kawano)

OSAKA--Kazuya Saka almost never watches the medal ceremonies at the Olympics and Paralympics.

But he'll be watching proudly when the winners take the podium at the Tokyo Olympics and Paralympics next summer.

"Athletes will be coming (to Tokyo) to win the medals we made. I definitely want to see the moment when the medals shine on their chests," he said.

Saka, 57, is the foreman in charge of the finishing stage of the medals for the Japan Mint, which is commissioned to produce the medals engraved with the 2020 logo.

He works alongside Shota Tomioka, 46, who is the technical manager in charge of striking the medals.

Both have honed their skills in the metalwork division since joining the Japan Mint after graduating from high school.

While the 2020 Tokyo Olympics and Paralympics have been postponed due to the COVID-19 pandemic, production of about 5,000 medals given to the winning athletes is coming to an end as scheduled.

Although the Summer Games were rescheduled to 2021, they still carry the moniker of Tokyo 2020.

According to the officials, there are two major steps in the manufacturing process, which started in January 2019.

During the impressing process, Nike, the Greek goddess of victory, and other images are mechanically impressed onto the blank metal disc hollowed out of a metal plate. The disc is then plated and dents and scratches removed during the finishing process.

Both Tomioka and Saka were also involved in the production of Olympic medals for the 1998 Nagano Winter Games.

However, Saka said they were merely accorded the privilege of learning the skills from their senior associates at the time. But this time they are fully involved in the Olympic festivities as experienced craftsmen.

The Paralympic medals are the same size as the Olympic medals. The gold medals weigh 526 grams, silver medals 520 gram and bronze medals 430 grams.

Tomioka and Saka said they went through several months of trial and error to ensure that the medals of each color are identical in weight.

The design engraved on the medal could move slightly out of position because the more the metal mold installed on a press machine is used, the more it wears down.

To fix such irregularities, it is imperative for the workers to keep a close eye on the surface that reflects light and manually smooth scratches to the level of a millimeter with a spatula and other tools.

"I have been working under pressure," Tomioka said, with Saka adding, "We are required to make the first and 5,000th medals shine in the same way."

They have continued their work as initially scheduled to deliver the medals in time for the canceled July opening of the Olympic Games, and the project has entered the homestretch.

Mint officials are considering where to store the 5,000 medals until next summer. Because they are metal, there is a risk for the colors to change or become dull. Humidity is the greatest enemy and attention must also be paid to room temperature.