Kyoto’s bonfire festival to be dimmed as virus precaution 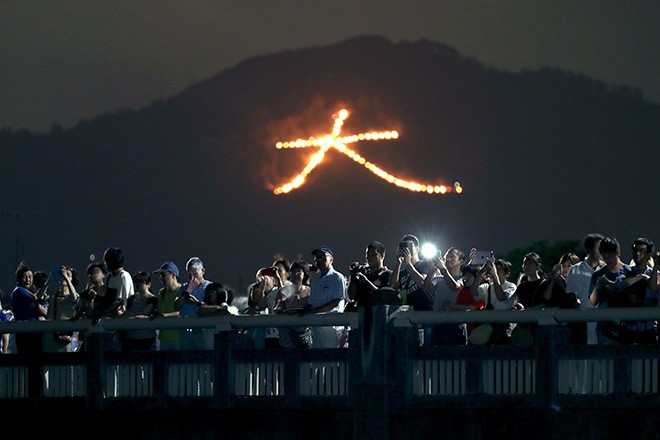 Spectators gather at the Gozan no Okuribi festival on Aug. 16, 2019, one of the most famed summer festivals in Kyoto. (Asahi Shimbun file photo)

KYOTO--Organizers of one of Kyoto's most beloved summer festivals will keep the fires burning on the mountainsides but significantly curtail the spectacle to prevent the spread of the coronavirus.

The federation of Gozan no Okuribi, a group that organizes the traditional Aug. 16 festival, said on June 27 it will reduce the locations where bonfires are lit to form the shapes of characters and symbols.

As a result, the fiery images will pale in comparison to those that illuminated Kyoto’s night sky in past festivals.

“Let’s avoid congestion and hold a quiet festival,” said Hidefumi Hasegawa, head of the federation, in calling for public understanding.

During previous events, five mountains surrounding the ancient capital were set ablaze in a gesture to send the spirits of the deceased ancestors to the afterlife after revisiting their former homes.

The festival’s most well-known character is Daimonji, which is lit on Mount Nyoigatake in Sakyo Ward in the eastern part of the city, as the first bonfire of the night.

The character "dai," which means large, is usually formed with bonfires lit at 75 spots. But this summer, only six bonfires will comprise the character.

The Daimonji will be followed on the other four mountainsides by Myoho; Funagata, a boat-like shape; another dai character, which is known as Hidari Daimonji; and Torii-gata, which is the shape of a torii shrine gate.

Those characters and symbols will be made with only one or two bonfires this summer, compared with each varying from 53 to 108 blazes in past festivals.

The federation decided to reduce the number of locations to be lit to avoid the mass congregation of bonfire workers there.

The measure is also expected to reduce the number of spectators, contributing to their safety.