Only 3% of Osaka residents have received 100,000 yen relief money 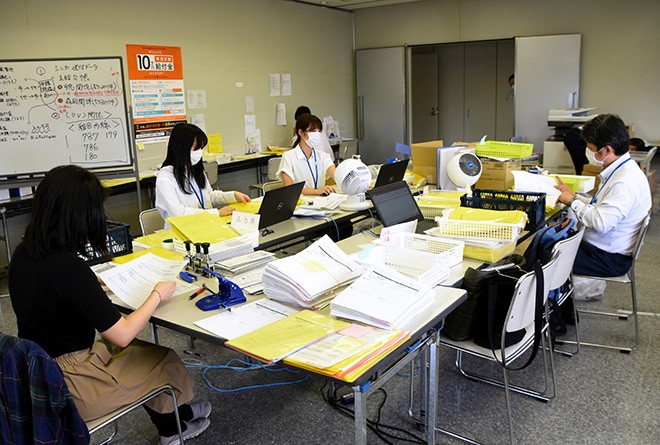 Almost two months after a payout of 100,000 yen ($926) was approved for coronavirus relief, only 3.4 percent of residents in Osaka have received the lump sum payouts, the highest delay seen across Japan.

Apart from Osaka, the only other two major cities whose ratio of those who have banked the cash handouts are under 10 percent was Chiba, at 7.9 percent, and Nagoya, at 8.8 percent, an Asahi Shimbun study showed.

The Asahi Shimbun contacted 20 major cities, including Sapporo, Yokohama, Kyoto, Fukuoka as well as Tokyo’s 23 wards, on June 25 and 26 to check on the latest figures concerning their jurisdictions.

Officials of all 43 local governments replied, providing data ranging from June 19 through June 26.

The figures for those cities and wards were considerably lower than the national average of 64.7 percent of a total of 58.53 million households in Japan as of June 24, which was released by the Ministry of Internal Affairs and Communications.

The significant gap between large cities and the national average is attributed to the mountains of paperwork municipal governments with large populations, particularly those with more than 1 million households, must process.

“We have been tied up with responding to inquiries,” said an Osaka official, explaining the delay.

As for Nagoya, an official said that opening application letters for the payout is a time-consuming process on its own.

The ministry does not release the delivery ratio by each local government, citing concerns that revealing such figures could stoke competition among municipalities.

Apart from Osaka, Chiba and Nagoya, Kawasaki, Sagamihara and two other cities as well as Tokyo’s Setagaya Ward did not reach the 20-percent mark.

But the study also showed the sheer size of the cities does not explain the delay reported in large cities.

For example, the delivery rate was 91.7 percent in Sapporo, with 1.08 million households. The rates were 78.2 percent for Kobe and 52.5 percent for Fukuoka, both of which have comparable populations.

In four cities, including Niigata and Kumamoto, the ratio was at least 80 percent. In Tokyo, Nerima and Katsushika wards reported more than 80 percent.

The Diet approved the lump sum payouts in a supplementary budget it passed on April 30 as an emergency measure to help households weather the coronavirus pandemic. Every man, woman and child in Japan is eligible, along with foreign residents.

(This article was written by Chinami Tajika and Yusuke Morishita.)