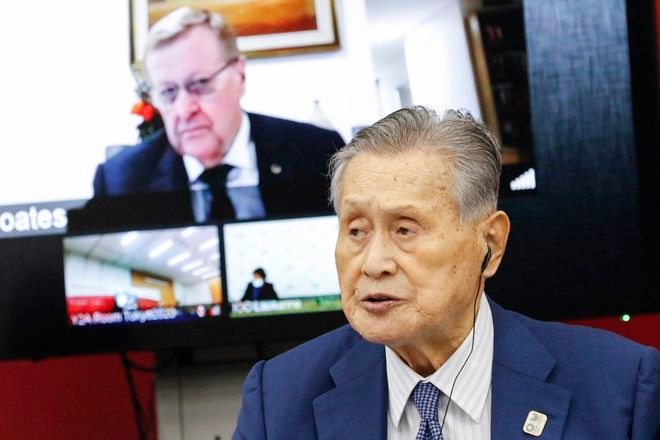 Yoshiro Mori, president of Tokyo 2020, and John Coates (on the screen), chairman of the Coordination Commission for the Games of the XXXII Olympiad Tokyo 2020, speak during a joint news conference between the International Olympic Committee and Tokyo Organizing Committee of the Olympic and Paralympic Games (Tokyo 2020) on Sept. 25 in Tokyo. (Pool photo via AP)

Cheapskates depicted in “rakugo” traditional Japanese comic storytelling take their parsimony to such an extreme that they are sometimes almost refreshing.

In one rakugo story, a master tells an errand boy to go and borrow a hammer from a neighbor’s house. The master of the house asks the boy whether the nails are made of iron or bamboo and says he cannot lend a hammer for iron nails because the hammer would wear thin.

When the boy tells his master what the neighbor said, the man angrily says, “What a tightwad! Well then, we have to use ours.”

We need the spirit of thrift, if not parsimony, for managing the costs of the Olympics, which critics say are now exorbitant.

A small step has been taken against the Olympics extravaganza. The International Olympic Committee and the Tokyo Organizing Committee of the Olympic and Paralympic Games have agreed on a cost-cutting plan to partially offset the massive financial loss caused by the decision to postpone the event to next year.

The adopted list of cost-cutting measures, however, is dominated by ideas that should be implemented anyway--even if the event had not been affected by the novel coronavirus pandemic. They include cutting back on lavish spending on food and beverage services for Olympic executives and scaling down the decorations inside and outside venues.

The total amount saved is estimated to be several tens of billions of yen, a drop in the bucket compared to the total cost of the Summer Games, which was estimated to be more than 1.3 trillion yen ($12.34 billion) before the decision to postpone the event.

Japan’s proposal to shorten the opening and closing ceremonies was not adopted. The IOC pointed to its deal with the U.S. TV broadcaster that paid a huge sum for the broadcast rights to the Olympics, according to a Sept. 26 Asahi Shimbun report on the issue.

The pandemic seems to have made little dent in the enormous clout of U.S. TV broadcasters, which forces Olympics organizers to set the event schedules to best suit airtimes in the United States.

What is worrying is the possibility that the tremendous amount of money from TV broadcast rights and sponsorship contracts could put irresistible pressure on organizers to forge ahead with the mammoth event at any cost.

Japan has barely managed to prevent medical institutions from being overwhelmed by COVID-19 cases. We deserve to be spared the collapse of our health care system due to the Olympics.

Staggering amounts of money are involved in the business of the Olympics and there are legions of people who deal with the cash.

In this gargantuan ecosystem, there seems to be no room for the kind of lovable cheapskates described in rakugo stories.