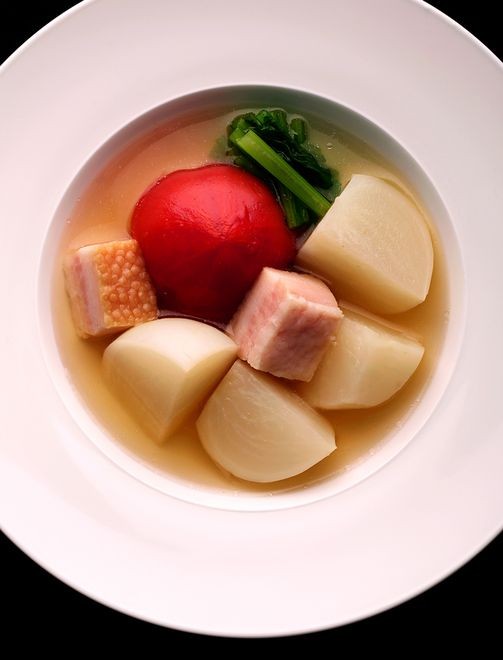 In this new four-part series, we will introduce dishes that use simple ingredients and take a short time to cook, yet turn out savory. They will incorporate umami-rich ingredients in clever ways.

The ingredients range from traditional to familiar foods. We start with bacon. Its use is wide ranging, perhaps best known as a breakfast side dish to fried eggs, but we will be using it to make a rich, savory soup broth.

Just like the “katsuobushi” (boiled, dried, smoked and fermented skipjack tuna), it is smoked and its fat content adds a rich flavor. By cutting it into large pieces, it becomes an enjoyable ingredient for a summer variation of “oden” (hot pot, usually with fish-paste products, vegetables, and others).

The bacon is complemented by tomatoes and turnips. We recommend tomatoes that are sweet and sour and have a firm flesh. After peeling them, they will have a smooth finish and blend better with the broth.

Aside from the turnip, you could use the winter gourd (“togan”) or peeled eggplant, as both are high in water content and absorb the stock well. The dish can be enjoyed cooled as well.

The arranged version is a fried spring roll that draws on the bacon’s aroma.

The bacon goes well together with cheese and green shiso leaf.

The cooking science aspect of this series is supervised by Hiroya Kawasaki, who studies the relationship between flavors and cooking methods at the Institute of Food Sciences and Technologies at Ajinomoto, a major food corporation.

“We divided how to use the umami components in food, such as glutamic and inosinic acids, into three stages,” he said.

The first stage is “to increase the concentration by drying or heating.” Dried fish is an example. The next stage is “to change the form of the ingredient to make it easier to use.” For example, hard katsuobushi is shaved before it is used.

The final stage is “to transfer to other ingredients.” When the umami components are transferred to water, they turn into dashi stock, and when vegetables are simmered in the stock, they turn into vegetable dishes with the savoriness of fish and meat.

This is said to be why Japanese dishes are satisfying, despite having low calorie counts.

1. Cut off the long and thin part of the turnip root, cut off greens, and quarter turnip. Bring water to a boil in pot, have bowl with ice water ready. When water comes to a boil, drop tomatoes (PHOTO A), scoop out after 5 to 10 seconds and immerse in ice water. Then boil turnip green for about 20 seconds and immerse in water. When tomatoes have cooled, hollow out calyx with kitchen knife and peel by holding the end of the skin between the knife and thumb.

3. Add sake and bacon in pot and place on medium heat. Bring to a boil to burn off alcohol, then add soy sauce, water and turnip. When it comes to a boil again, lower heat and simmer for 5 minutes so the surface ripples quietly.

4. Check taste of soup and season with salt. Add tomatoes carefully to pot (PHOTO C). Maintain heat level and cook for about 10 minutes until tomatoes are heated to the core. Garnish with turnip green.

Hiroya Kawasaki studies the science of tastiness and cooking method at Ajinomoto’s Institute of Food Sciences and Technologies.

Prepare one bacon slice per spring roll and cut length in half. On a spring roll wrapper, place a bit of chopped garlic, 1 green shiso leaf, bacon, 1 cheese slice (folded to the width of bacon) and bacon again in this order. Using a mixture of equal parts flour and water as glue, wrap in rectangular shape.

Thinly coat the frying pan with olive oil, lay spring roll shiso-side down and place on low heat. Press occasionally with a spatula to brown evenly, turn, add oil and cook the same way. Serve with lemon if preferred.

Curing the bacon with salt curbs the growth of germs and improves its shelf life, while enhancing the flavor. The water content is reduced, and the enzyme in the meat breaks the protein down so that glutamic acid, an umami component, increases. During the smoking process, the wood smoke seeps into the meat, adding aroma while forming a film on the surface.