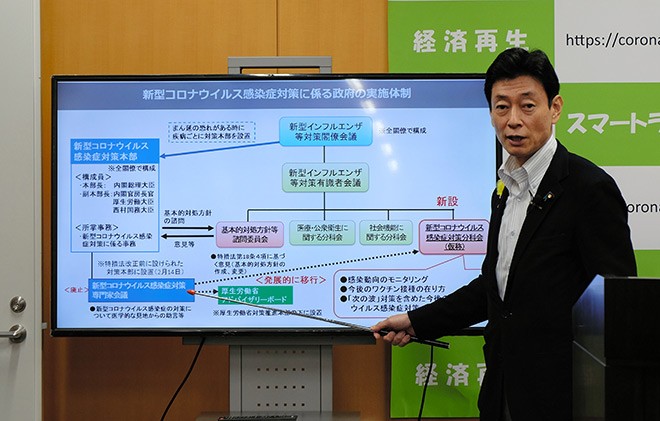 Yasutoshi Nishimura, the minister in charge of measures to combat the novel coronavirus, at a news conference on June 28 (Satoshi Shinden)

Yasutoshi Nishimura, the minister in charge of measures to combat the novel coronavirus, backtracked on his surprise statement that the panel of COVID-19 experts will be disbanded.

“I regret that my statement was taken as if the central government would push out these experts,” Nishimura said at a news conference on June 28.

He said he “did not fully explain” the government’s position when he announced on June 24 that it will scrap the current expert panel and replace it with a new entity.

Nishimura said the purpose of the new council is to discuss issues that require attention from people outside the field of infectious diseases. Its members will include the governors of Tokyo and other prefectures, business leaders, labor issue experts and people who work in the media, Nishimura said.

But he added that some of the current panel’s members will be asked to join.

He said it was “too strong” for him to say the government will “scrap” the panel.

“Rather, we will transition expansively,” he said.

His announcement on June 24 stunned main panel members who had not been informed of the decision. Lawmakers of the ruling Liberal Democratic Party and junior coalition partner Komeito had not been consulted beforehand, either.

Shigeru Omi, vice chair of the expert panel, was attending another news conference when Nishimura said the panel would be disbanded.

“I have no idea,” Omi said, looking confused when asked about Nishimura’s remarks.

The central government was initially expected to make a final decision on the new council at its coronavirus task force meeting this week. But that decision will likely be postponed, according to government sources.

The government still plans to hold the first meeting of the new entity no later than July 10, after explaining the decision to Komeito this week, the sources said.

Nishimura emphasized that communication between the central government and Omi has been effective.

“We want to continue to work together with Omi,” he said.

Nishimura’s announcement about disbanding the expert panel raised concerns because the number of new COVID-19 cases was rising in Tokyo.

On June 28, he pointed out that nearly 90 percent of new infections around the country in recent days have been concentrated in the Tokyo metropolitan area.

“There is no nationwide outbreak,” he said. Since the health care system is not on the verge of a crisis, “we are not in a situation to issue a state of emergency.”

The central government is also not planning to restrict movement in the Tokyo metropolitan area, Nishimura said.

(This article was written by Ayako Nakada and Satoshi Shinden.)