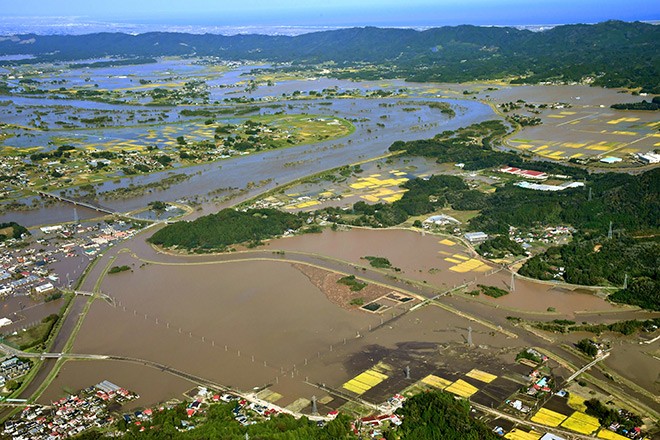 Marumori, a town in Miyagi Prefecture, is inundated with floodwater after the Shinkawa river, left front, burst its banks in Typhoon No. 19 in October 2019. The Shinkawa river is a tributary of the Abukumaga river. (Asahi Shimbun file photo)

More than half of the nation's 8,000 small and midsize rivers that could cause flooding still do not have designated areas where swamp-like conditions result in torrential downpours, an Asahi Shimbun study shows.

Local officials cited a lack of budgetary funds for the task and the priority given to providing the same designations for major rivers deemed at high risk, as required under the flood defense law.

The urgency of producing a flood hazard map for smaller waterways is growing because all the ones that caused extensive flooding due to torrential rains in western Japan in 2018 and a typhoon in eastern Japan last year fell into the category of small and midsize waterways.

The flood defense law requires the central government, as well as Tokyo and the 46 other prefectural governments, to designate areas that are susceptible to flooding for about 400 large rivers and around 1,700 rivers, given their potential to cause tremendous damage when torrential rains hit.

However, the law does not oblige authorities to do the same for small and midsize rivers.

Forty-three of the 71 rivers whose banks burst when Typhoon No. 19 struck last year were in the category of rivers not at high risk.

In 2018, riverbanks of three tributaries of a main river breached in Okayama Prefecture due to heavy rain, resulting in 51 deaths.

As a result, prefectural authorities name potentially vulnerable areas at their own discretion if houses and public facilities are located nearby, no matter what category the waterway falls into.

The Asahi Shimbun study contacted prefectural governments to ascertain the situation for small and midsize rivers as of the end of May.

There are 19,510 such rivers across the nation.

Of these, local officials believe that flood-risk areas should be designated for 7,977 rivers, or 40.9 percent of the total.

Local authorities said there were unable to label areas likely to be affected because their immediate priority was to meet their legal obligation to identify high-risk areas for major rivers.

They also cited a shortage of funds for the delay in the work.

Of the 47 prefectural governments, 15 replied that they are examining rivers in their jurisdictions to determine whether there is a need to name potentially vulnerable areas.

This suggests that the number of rivers with the potential to trigger major flooding will increase from the current count.