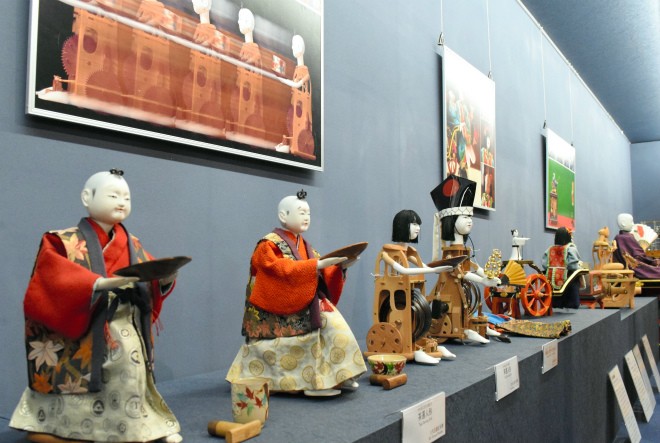 Tea-serving automata powered by a wound spring are on display at the IMASEN Inuyama Karakuri Museum in the Inuyama district of Inuyama, Aichi Prefecture. (Yoshihiro Ogino)

INUYAMA, Aichi Prefecture--Spectators who thrill to the sight of the "karakuri" mechanical dolls at the city's famed Inuyama Matsuri float festival can now see them year-round on display.

The IMASEN Inuyama Karakuri Museum opened here on June 1, showcasing the mechanical dolls, which were made in the Edo Period (1603-1867) and later.

Some of the dolls ride "yama" floats at the Inuyama Matsuri, one of the float festivals registered on the UNESCO Intangible Cultural Heritage list.

The new museum also offers a rare opportunity to see how mechanical dolls are operated and created in a section used as a branch studio for the ninth-generation Tamaya Shobei, 65, a karakuri doll master, who resides in Nagoya's Kita Ward.

The city government spent 160 million yen ($1.5 million) to build the museum as the south annex of the Inuyama Cultural Assets Museum.

There had been a karakuri exhibition facility on the east side of the main building. But because the building rented by the city government to house the facility had fallen into disrepair, among other reasons, officials erected a new wooden two-story building with a total floor space of 463 square meters to incorporate more exhibits.

It was initially scheduled to open in April, but the novel coronavirus pandemic forced the postponement.

Placed on display at the museum are 38 large and small mechanical dolls, including manually powered "dashi karakuri" used for the Inuyama Matsuri festival and "zashiki karakuri," or spring-driven automata, for domestic use.

It is thought that "Baishogi," a karakuri doll performance featuring a doll of a Chinese boy playing on the top of a plum tree, was made by the third-generation Tamaya Shobei in 1827 and had been used at the Inuyama Matsuri until 2002.

Also featured at the museum are tea-serving automata and other zashiki karakuri dolls created by the ninth-generation Tamaya Shobei.

Visitors can watch videos of the mechanical dolls at the museum by scanning QR codes with their smartphones. Members of the Inuyama Matsuri preservation association also give doll performances in the morning and afternoon every day.

A re-creation of Tamaya's studio is also set up at the museum, in which he shows how he creates karakuri dolls on Fridays and Saturdays.

"There is no other facility that puts this many karakuri dolls on display," the doll maker said. "I hope visitors watch how I make them up close."

The venue will be closed during year-end holidays.