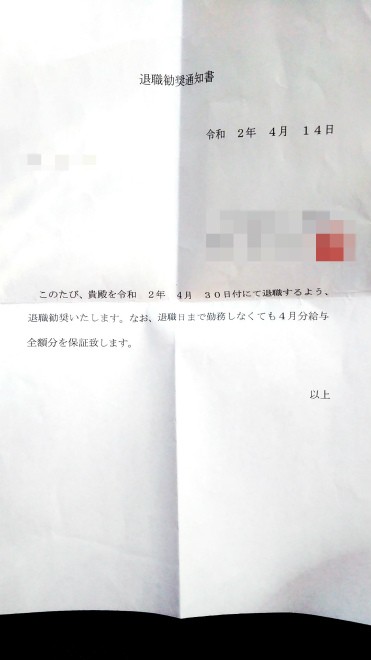 A notice of a recommendation to retire that a woman received from her employer. “It is effectively a dismissal,” she said, since it does not give any reasons for the decision. “I can’t even explain why I had to quit to my next employer.” Part of the photo is blurred to protect her privacy. (Provided by the woman)

Some workers taking sick leave due to colds and other ailments have found themselves unable to return to their jobs because they cannot prove to their employers that they tested negative for COVID-19.

In one case, a woman was even forced out of her job because she was unable to obtain the document her employer had insisted she provide before returning.

A woman in her 40s living in the Kanto region is furious with her former employer because she was forced to resign after taking time off for a cold.

“I can’t understand why I had to lose my job,” she said.

She used to work as a nurse, providing health consultations for residents at a nursing care home. But she was forced out of work after her employer began to suspect she had contracted the novel coronavirus.

One day in early March, she ran a slight fever and went home early. The following day, she went to a hospital and was diagnosed with the common cold. At another hospital, she was told the same thing: she was not suspected to have the coronavirus.

Her fever persisted, and she reported it to her employer.

“We’ll pay you 60 percent of your salary, so take leave until the end of March,” her employer told her.

The woman is a single parent raising two sons. She was afraid she would no longer be able to maintain her livelihood, so she consulted with a medical institution.

At the beginning of April, she was granted special permission to undergo a polymerase chain reaction (PCR) test, despite showing none of the symptoms of COVID-19, such as coughing or losing her sense of taste or smell. The results were negative.

When she told her employer that she tested negative for the virus, she was asked to submit a certificate proving it.

But the medical institution where she was tested does not issue those certificates. She had to get the institution to explain to her employer that it is safe for her to return to work because her symptoms do not match those of the coronavirus and she tested negative for it.

She resumed working in early April. But she was summoned by her boss about a week later who handed her a notice of a recommendation to retire, urging her to quit on April 30.

“We can’t work with someone who is suspected of being infected,” she was told.

The woman followed the instructions to pack up her stuff and go home by the end of the day. She left without delay.

While job hunting, she could not help but worry that some people might mistakenly believe she was forced out of work after contracting the coronavirus. She frequently thought about it, and it would cause her to stop writing her resume. But she finally managed to land a new job at the end of May.

“I took extra precautions against infections because my job requires interaction with elderly people, and I understand my employer wants to protect the workplace,” the woman said.

“But is it right to fire people just like this?” she asked, her eyes watering.

“If I had known I was going to be treated like this, I never would have become a nurse.”

The Ministry of Health, Labor and Welfare is urging companies to refrain from making the document a requirement to return to work.

People can only take the PCR tests for the virus under certain conditions, such as when their doctors deem it is necessary, in principle. And they may not be able to obtain certificates declaring they are infection-free even if they are tested.

Others are navigating a similar Kafkaesque experience as they try to return to work from sick leave.

The ministry’s local labor bureaus, as well as public health centers around the country, confirmed they have received inquiries for certificates attesting to a person’s negative PCR results.

“I said, ‘I feel cold,’ at my office, as a sort of joke. But the shop manager told me, ‘See a doctor and do not report back to work unless you bring a certificate that proves you’re not infected,’” said one of those who consulted with the Hyogo Labor Bureau in spring.

The bureau said the worker was told by a hospital that it does not issue the certificate, making the person unable to return to work.

At a news conference in February, the deputy director general in charge of health and sanitation of the Okinawa prefectural government called on companies not to ask for such certificates from employees who took leave because of colds or other health issues unrelated to the coronavirus.

The department made the request after getting several reports from workers who said they were asked to submit certificates before reporting to work after their sick leaves.

The ministry said PCR tests cannot definitively confirm that those who test negative do not carry the virus. It pointed out the amount of the virus in an individual's body can fall below the detection threshold, depending on the timing and method of collecting test samples.

The ministry also explained in a list of frequently asked questions for companies on its website that not all medical institutions and public health centers issue documents attesting to the results of workers’ PCR tests.

It is urging companies to refrain from asking for the documents because a flood of requests adds strain to those institutions already dealing with a major health crisis.

Chikara Shimasaki is a member of the executive board of the Labor Lawyers Association of Japan and is an expert in workers’ rights.

He said he understands employers want to ensure the coronavirus will not spread throughout their workplaces, but that does not justify refusing to pay workers on precautionary leave or urging those who cannot submit “COVID-19 negative” certificates to quit.

“It’s a reasonable response for companies to prohibit employees from reporting to work as a precautionary measure or ask them to present the results of PCR tests from the viewpoint of preventing infections, and there’s no problem with that,” said Shimasaki.

But he said he believes employers have an obligation to pay the full amount of wages to those who are forced to take precautionary time off from work because it is the company’s decision to refuse them permission to work.

“It’s illegal and unacceptable to refuse to pay salaries to employees or force them to quit when they fail to obtain certificates showing negative results for PCR tests because medical institutions decided not to issue such documents,” Shimasaki said.