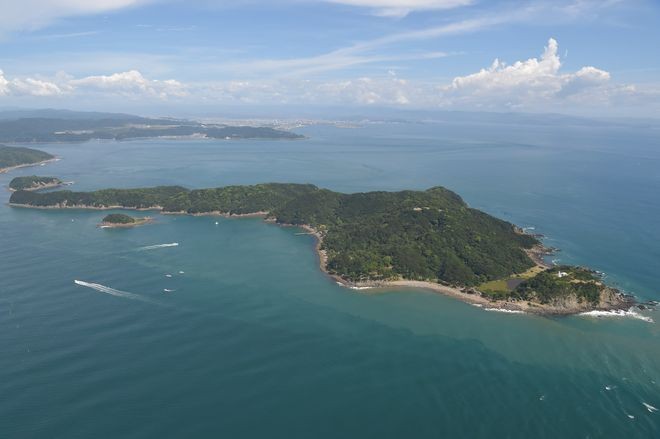 Tomogashima, an uninhabited island off the city of Wakayama, is known as "Yosai no Shima" (island fort) for its military structures that were installed during the Meiji Era (1868-1912).

The old artillery batteries, now overgrown with moss, make Tomogashima look like the floating island of Laputa in the 1986 Japanese animated fantasy-adventure film "Castle in the Sky."

While I thoroughly enjoyed the island's other-worldly sight, I could not take my mind off the massive amount of garbage that had washed up on the shore.

"This is nothing new. Ever since I was in primary school, I've been coming to the island to pick up trash," said Masanori Ineno, 47, who heads the tourist association of the Kada district in northeastern Wakayama.

"Picking them up is all we've been able to do," Ineno lamented. "We've got to do something about their sources."

Tomogashima's location makes it block the sea current flowing from Osaka Bay to the Pacific Ocean.

Tomoyo Chiba, 35, an environmental policy expert and associate professor at Osaka Prefecture University, theorized that garbage from the entire Kansai district must be washing ashore on the island and began a field survey.

Plastic bags accounted for only a small percentage, Chiba said, but the damage caused by them is extensive.

"Thin plastic bags are pulverized by waves and ultraviolet rays into tiny fragments, which flow into the ocean," she explained. "And there is no way you can recover them."

How many of those bags have I thrown away to date? It horrifies me to even imagine the total number. I remember regretting, on countless occasions, not telling the checkout clerk that I didn't need the bags.

Since a long time ago, the little island of Tomogashima has fought hard to stop plastic rubbish from drifting out to the ocean.

This reality represents the woeful mistake our society made to condone massive consumption of those plastic bags, simply because they seemed cheap, light and so convenient.