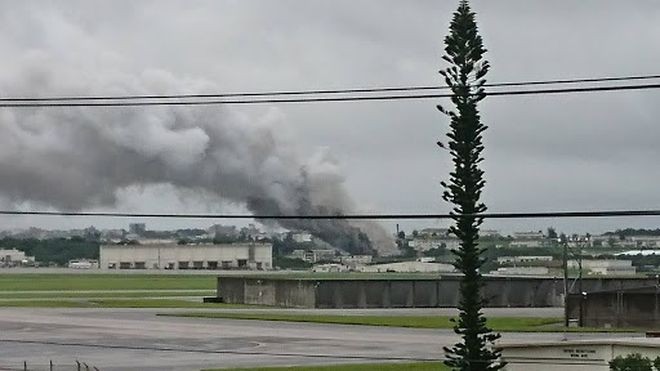 Smoke billows from the U.S Forces’ Kadena Air Base in Okinawa Prefecture on June 22. (Provided by an Asahi Shimbun reader)

Another accident at a U.S. military base has underscored afresh the safety risks and concerns for Japanese citizens related to the U.S. forces that are stationed in Japan supposedly to defend Japan.

A fire broke out on the morning of June 22 at a hazardous materials facility at the U.S. Kadena Air Base in Okinawa Prefecture, releasing toxic chlorine gas particles. Some 100 people within the base were affected, according to the U.S. military. They complained of such health-related problems as eye and throat irritation.

The fact that a fire tore through such a hazardous facility within a U.S. base itself is outrageous. What is equally disturbing is the serious delay in the U.S. military’s reporting of the accident to Japanese authorities.

It was not until two and a half hours after the fire started that the U.S. base first notified the Kadena town office of the accident. The municipal government was not formally informed of the release of toxic gas until around 7:30 p.m. on the day, more than 10 hours after the fire began.

During these hours, the Kadena base authorities alerted people within the air base to the possible health hazard through Facebook posts.

The base authorities have said reporting the fire to the local government was delayed because they first had to grasp the situation and seek opinions from experts, adding that no gas leaked outside the base. But who would buy this explanation?

Thick plumes of smoke rising fiercely from the site were clearly seen from outside the base. The local government and communities were left in the dark about what was happening within the base for hours.

In April, a large amount of firefighting foam containing a chemical known to cause cancer leaked from U.S. Marine Corps Air Station Futenma in the city of Ginowan, also in Okinawa. On-site investigations into the hazardous leak were carried out only recently by Japanese officials from the central, prefectural and municipal governments.

In the event of such an emergency, the U.S. military has a duty to report it immediately to Japanese authorities and keep them updated in a timely manner.

As for the latest fire at Kadena Air Base, Defense Minister Taro Kono criticized the U.S. base authorities for not sharing information with Japan in a timely manner, saying, “the U.S. military did not inform the Japanese side properly.” Kono also said he had directed his officials in charge to urge the U.S. military to share information promptly without fail.

Needless to say, the cause of the fire must be identified and measures to prevent a recurrence must be taken. The two governments, however, should move beyond these imperatives and examine how the U.S. military failed to share information quickly and embark on a review of the reporting system.

This is not the first major fire at a U.S. military base. A fire occurred at the U.S. Navy’s Maebata Ordnance Facility at Sasebo Naval Base in 2006 and Sagami Depot at the U.S. Army base in Sagamihara was struck by a blaze in 2015.

This is a problem not confined to Okinawa but one that should be tackled by the entire nation of Japan.

In 2018, the National Governors’ Association called for a fundamental revision of the U.S.-Japan Status of Forces Agreement (SOFA) to allow local government officials to enter U.S. bases quickly and smoothly in time of a crime or an accident.

Germany’s status of forces agreement with the United States allows German federal and local authorities to enter U.S. bases swiftly in such cases. So the proposal is nothing unreasonable.

The fire and the release of toxic gas at the Kadena base occurred the day before Okinawa Memorial Day, when people in the prefecture console the spirits of those who died in the Battle of Okinawa in 1945. The accident came as a fresh and pointed reminder of the excessive burden borne by residents living around U.S. military bases.

The situation must not be left unaddressed any longer.