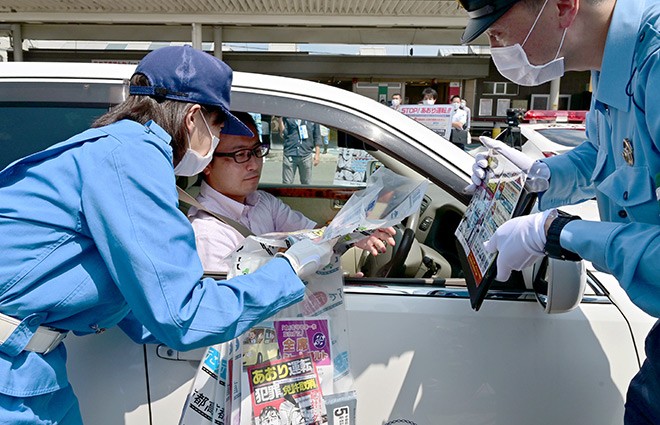 Police officers pass out pamphlets on June 29 explaining tougher penalties for reckless driving at a parking area of the Chuo Expressway. (Hiroyuki Yamamoto)

Armed with stiffer penalties, police put motorists on notice that those who pose a danger to others through reckless driving now face hefty fines and lengthy prison terms.

The June 30 enactment of tougher penalties stems in part from a well-publicized road rage incident three years ago that left a couple dead and their two daughters injured.

The new measures also address reckless driving that may not have led directly to traffic fatalities or injuries.

The revised Road Traffic Law that went into effect from June 30 defines a new category of driving to interfere with other drivers as an area where tough penalties will be imposed.

Ten types of reckless driving were cited, with two covering driving on expressways. Driving too slowly or suddenly stopping on expressways is now considered a crime if such actions serve as a danger to other vehicles.

Among the eight types of reckless driving on ordinary roads are suddenly hitting the brakes and tailgating another vehicle. Making a sudden lane change, repeatedly honking the car horn, keeping the high beam light directed at the vehicle in front and other forms of reckless driving are also covered.

When police are summoned to deal with complaints about reckless driving, they will use camcorder video, witness statements and tire tracks to determine if a driver's behavior interfered with others.

Drivers found guilty of interfering with others face a maximum penalty of three years in prison or a fine of 500,000 yen ($4,600).

The penalties are even stiffer for the two examples of interfering with driving on expressways. Drivers found guilty face a maximum penalty of five years of imprisonment or a fine of 1 million yen.

In either case, the driver’s license will be immediately invalidated. Those found guilty of interfering on ordinary roads will have to wait two years to reapply for a license while those caught on expressways face a three-year wait.

If a driver had his or her license revoked in the past, the wait to reapply could rise to a maximum of 10 years.

Revisions in another law that take effect from July 2 also severely punish instances of  reckless driving that results in injury or death.

Abruptly stopping on expressways to force the vehicle behind to stop is now defined as dangerous driving.

Until now, only driving at excessive speeds on expressways that led to a serious accident was considered dangerous behavior.

The court case that resulted from the road rage incident that killed the couple on the Tomei Expressway and injured their two children revolved around whether stopping on the expressway was considered dangerous driving. The couple who stopped their vehicle were killed when a truck hit their car from behind.

The provisions for interfering with other drivers will also apply to bicycle riders.

Seven forms of reckless riding have been defined for bicycles, including moving over into the oncoming traffic lane, suddenly stopping while a car approaches from behind and repeatedly ringing the bicycle bell.

Any bike rider caught and found guilty twice over a three-year period will have to pay for and sit through three-hour lectures by the police about safe riding.

(This article was written by Takuro Yagi and Hiroyoshi Itabashi.)