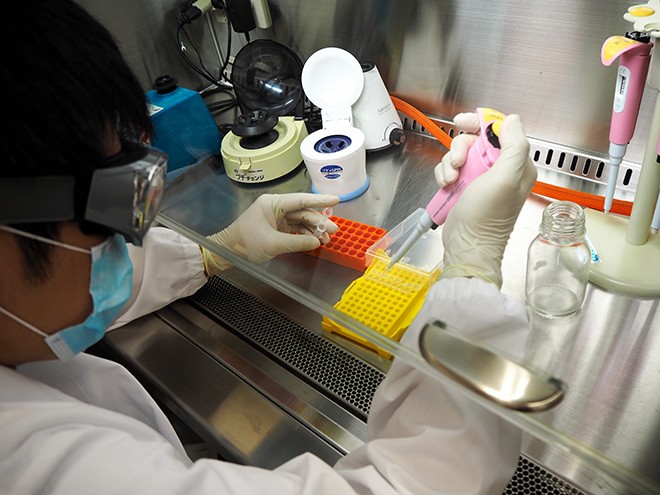 A researcher tests if the new coronavirus is found in a sewage sample. (Provided by the University of Yamanashi)

Researchers have discovered the novel coronavirus in sewage in Yamanashi Prefecture, a finding they say could help detect a second wave of infections.

Led by Eiji Haramoto, a University of Yamanashi professor, and Hokkaido University assistant professor Masaaki Kitajima, the researchers from the two schools collected 13 samples from sewage treatment facilities and rivers for five days between March 17 and May 7.

The samples were concentrated before they underwent polymerase chain reaction (PCR) tests.

The sample that tested positive had been taken from sewage on April 14.

The remaining 12 samples had been collected when the number of daily new infections in Yamanashi Prefecture hovered between 0 and 1. The number had risen to several in mid-April.

By June 25, the total number of people infected with the new coronavirus in the prefecture was 72.

Haramoto said on June 26 that the study showed the possibility of detecting the new coronavirus in areas with few infections.

“It is also possible that we may have detected the virus from people with no symptoms,” he said.

The new coronavirus apparently stemming from waste from infected people has been detected in sewage in the United States, France and elsewhere.

Sewage monitoring can help public health officials see how much the virus has spread or if the situation has improved almost in real time because test results can be delivered within the day if the samples are collected in the morning, according to the researchers.

The team’s paper was published on June 20 on the online environmental science journal ScienceDirect at (https://www.sciencedirect.com/science/article/pii/S0048969720339279?via%3Dihub).

The researchers said it is the first time such a finding in Japan has been reported in an academic paper.

Another group of researchers from Toyama Prefectural University and Kanazawa University had earlier said they detected the new coronavirus in sewage, but they have not published a paper on their finding.