MSDF destroyer returns to port after mission in Middle East 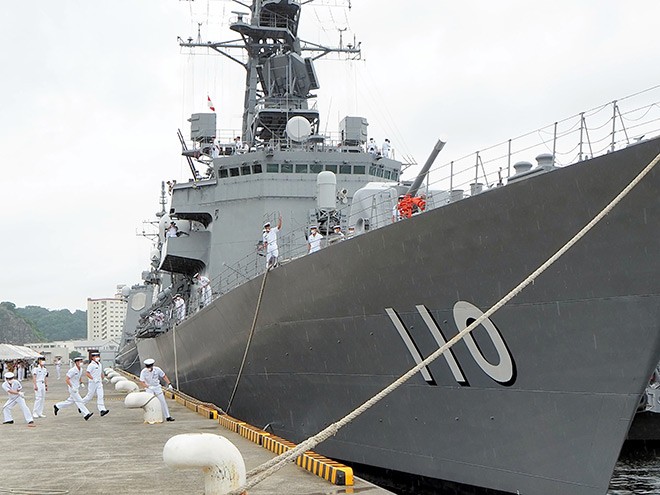 The destroyer Takanami arrives at the dock at the MSDF Yokosuka Base in Yokosuka, Kanagawa Prefecture, on June 30. (Yoshitaka Ito)

Amid low-key fanfare, the Maritime Self-Defense Force destroyer Takanami returned to its home port on the morning of June 30 after completing a mission in the Middle East to ensure safe shipping in the region.

Around 9:20 a.m., the 151-meter-long gray hull vessel arrived at the MSDF Yokosuka Base.

At a ceremony, Defense Minister Taro Kono gave a speech to crew members, who were deeply tanned by the strong sunlight in the Middle East.

“I think that you might have gotten frustrated because your ability to disembark from the ship was largely restricted, but I am proud of you for having completed your mission,” Kono said.

Crew members were forced to refrain from disembarking from the ship at port calls due to the global COVID-19 pandemic. The crew looked relieved as they stepped on land for the first time in about 150 days.

The ceremony was simplified to avoid a large welcome home gathering. Families of crew members are usually on hand to celebrate their return, but did not participate this time.

The Takanami had been on an intelligence-gathering mission in the Gulf of Oman and the Arabian Sea for about three and half months until early June. It was the first Japanese vessel dispatched on the current mission to the Middle East, which was approved by the Cabinet at the end of 2019.

On its mission, the Takanami monitored the actions and nationalities of about 8,000 ships navigating in the region and did not find any abnormalities.

Emergency contingencies, such as protecting private vessels with the destroyer's armaments, did not arise.