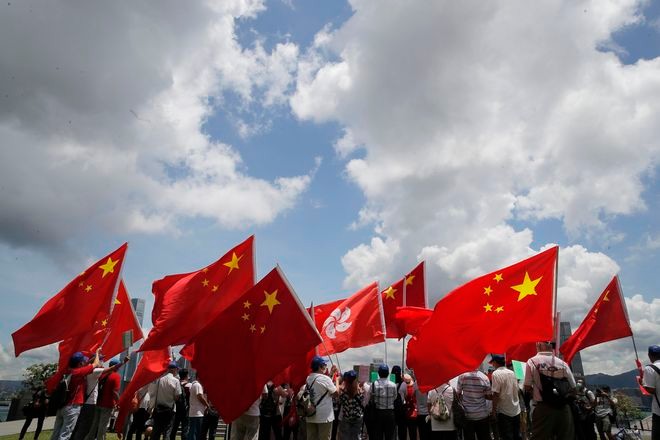 Pro-China supporters hold Chinese and Hong Kong national flags during a rally to celebrate the approval of a national security law for Hong Kong in Hong Kong on June 30. (AP Photo)

TOKYO/TAIPEI--Japan expressed concern and Taiwan voiced disappointment on Tuesday after China passed a national security law for Hong Kong that could bring about the starkest changes in the former British colony’s way of life since it returned to Chinese rule.

In Tokyo, top government officials called the legislation--approved by China’s parliament earlier--“regrettable,” saying it undermined credibility in the “one country, two systems” formula adopted at Hong Kong’s 1997 handover from Britain to China to preserve its wide-ranging freedoms.

“We will continue to work with the countries involved to deal with this issue appropriately,” Chief Cabinet Secretary Yoshihide Suga told a news conference.

Japan will also communicate closely with the United States and China, as stable relations between the two global powers were vital for regional and global security, he said.

Later, Foreign Minister Toshimitsu Motegi told reporters he shared the “deep concern” of the international community and the people of Hong Kong over the measure.

In Taipei, Taiwan’s Cabinet said in a statement the new law would “severely impact” freedom, democracy and human rights in the Asian financial hub and Taiwan would continue to offer help to its people.

“The government strongly condemns it and reiterates its support for the people of Hong Kong as they strive for democracy and freedom,” said Cabinet spokesman Evian Ting.

Months of anti-government, pro-democracy protests in Hong Kong last year won widespread sympathy in democratic and Chinese-claimed Taiwan, which has welcomed people from Hong Kong who have moved to the island and expects more.

Authorities in Beijing and Hong Kong have repeatedly said the legislation is aimed at a few “troublemakers” in Hong Kong and will not affect rights and freedoms, nor investor interests.

Nevertheless, Ting warned Taiwan people of “possible risks” when visiting Hong Kong in light of the legislation. He did not elaborate.

Taiwan President Tsai Ing-wen told reporters she was “very disappointed” by China’s imposition of the law, which proved that the “one country, two systems” formula, which Beijing has suggested could be a basis for unification with the mainland, “was not feasible.”

“We hope Hong Kong people continue to adhere to the freedom, democracy and human rights that they cherish,” said Tsai, who became in May the first government leader anywhere to pledge help for Hong Kong people spurred to leave.

On Wednesday, the anniversary of Hong Kong’s handover to China, Taiwan is set to launch a dedicated office to help those thinking of fleeing.