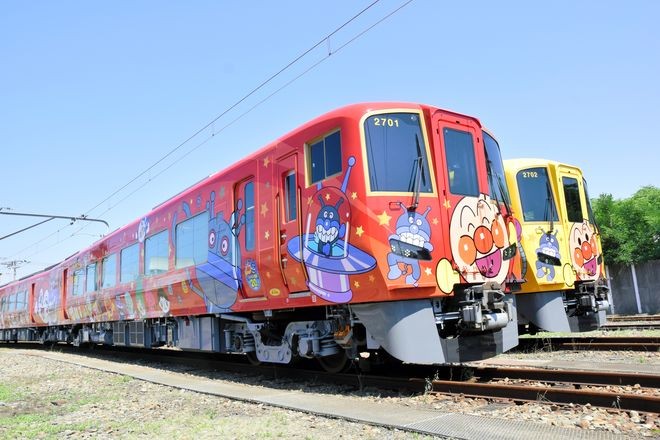 The anime series-themed special train will run on the Dosan Line of Shikoku Railway Co. (JR Shikoku) in Kochi Prefecture, where the late Takashi Yanase, the creator of the original superhero picture book series, grew up.

The company unveiled the new train to media representatives on June 22 at its Tadotsu factory here.

The train comes in two colors, red or yellow.

Remodeled from eight cars of the new 2700-series express diesel multiple unit introduced last year, the interiors and exteriors of the trains are decked out in illustrations of Anpanman and other characters.

The red-colored train features Anpanman characters in 84 versions on its exterior, while the yellow-themed train is decorated with 72 varieties. The anime characters are also featured on the seats, walls, ceilings and even in restrooms.

The Anpanman Train service initially went into operation on the Dosan Line in October 2000. Currently, it is also operated on the Yosan Line.

The YuYu Anpanman Car train mainly runs between Tokushima and Awa-Ikeda stations, while the Anpanman Torokko train connects the Takamatsu and Okayama stations and elsewhere.

As of January, 20 million or so passengers had ridden on the Anpanman trains, according to the company.