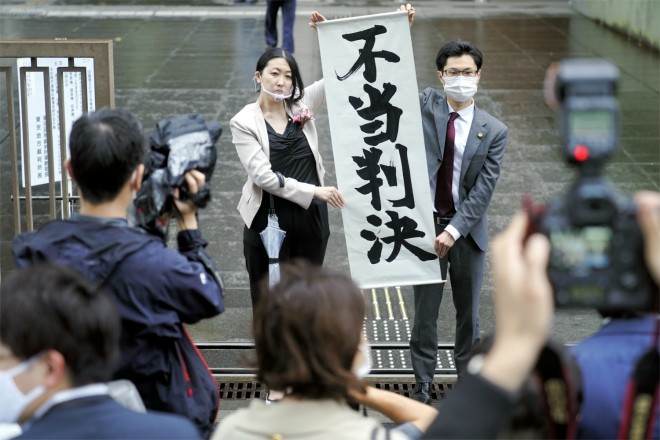 Lawyers hold up a sign proclaiming unfair judgment in the case at the Tokyo District Court on June 30. (Yosuke Fukutome)

A man who filed a damages suit against his forced sterilization in 1957 under the now-scrapped eugenics protection law was recognized by the Tokyo District Court on June 30 as having had his constitutionally guaranteed rights to "individual dignity" and pursuit of happiness violated.

The ruling was the latest reminder of the inexcusable culpability of the Diet that enacted this law in 1948 and of the central and local governments that kept it in force for decades. It also highlighted the moral bankruptcy of our society that failed to question the law's iniquity.

However, the Tokyo court's decision was far from satisfactory.

In a similar case last year, the Sendai District Court ruled that the eugenics law itself was unconstitutional. But the Tokyo court only indicated the unconstitutionality of the sterilization the plaintiff was forced to undergo, and rejected his demand for compensation.

The verdict showed little sympathy for the plaintiff, who was deprived of his right to decide whether to start a family. Furthermore, the reasons given for the verdict were not convincing.

Presiding Judge Masaharu Ito concluded that because the plaintiff was in a position to file his damages suit any time after the eugenics law was revised in 1996, his not doing so resulted in the forfeiture of his right to demand compensation.

The judge's point, in other words, was that as the public's understanding of the plight of people with disabilities grew and the old law's influence diminished in terms of condoning popular prejudice toward the disabled, there was nothing to stop the plaintiff from seeking legal redress much earlier.

It is an outrageous argument that revealed the judge's almost total lack of understanding of the plaintiff's plight.

And by noting in his ruling the "difficulty of eliminating the concept of eugenics as a real-life problem," the judge effectively absolved the Diet and the government of their failure to implement measures for compensating the victims and eliminating discrimination, other than to just revise the 1948 law in 1996.

It must be said the court abandoned its judicial responsibility to protect the rights of minorities and keep the legislature and administration in check from dereliction of duty.

The plaintiff's attorneys quite rightly denounced the ruling.

The matter of forced sterilization of people with disabilities appeared to have reached a certain degree of settlement in April last year, when a law came into force to pay a uniform lump sum compensation of 3.2 million yen ($29,600) per victim.

But many problems remain.

Aside from the argument that the amount is hardly adequate for the extent of damage done, only 621 individuals have been recognized as victims to date.

But there are 7,000 or so identifiable victims through records kept by local governments and health care organs. And given that about 3,400 of those people are believed to still be alive, the recipients of the compensation are all too few.

Attorneys who are working to support the victims say that many are still unable to come forward because the 1948 law maintained that the purpose of the sterilization was to prevent the birth of "inferior" offspring, or because a good number of the victims are unaware of their plight since they were operated on without any explanation.

From any one of these situations, it is all too clear how divorced from reality the latest Tokyo District Court ruling was.

Aside from publicizing the compensation payment program as broadly as possible, the government must also seriously consider contacting all victims in person while fully respecting their privacy.

The Diet recently decided to conduct a survey of the background of the 1948 law's enactment and the extent of the damage that ensued. The torment suffered by the victims can be redressed only through a good, hard look at the facts and close examination of the past mistakes made by the authorities concerned.