Viewed through revamped slide, cancer cells show their hidden side 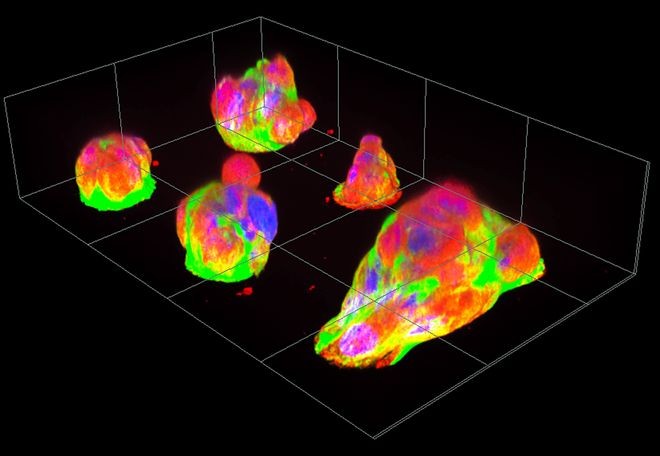 Cancer cells turn into tumor tissue and move around. The tumor on the right is 0.1 millimeter long. (Provided by Hokkaido University assistant professor Yukiko Miyatake)

SAPPORO--Cancer cells play dead to dodge attacks by immune cells, a scientist here discovered, and tumor tissue moves like a slug to fuse with other tumors, revelations that could trigger a breakthrough in the development of carcinoma treatment.

The phenomena were uncovered using a special glass slide that promotes the growth of cancer cells for in-depth observation developed by Yukiko Miyatake, 47, an assistant professor of experimental pathology at the Faculty of Medicine of Hokkaido University.

Miyatake designed the slide with tiny bumps on its surface in order to stimulate cells so they turn into tumor tissue.

To closely observe cancerous cells, Miyatake utilized a technique developed by Kaori Shigetomi, a specially appointed associate professor of micro- and nano-engineering at the university’s Institute for the Advancement of Higher Education.

The method created by Shigetomi, 45, allows one to two cells to be cultured on the slide, by taking advantage of semiconductor substrate development technology.

Miyatake said she expects the technique to become commercially available within a year.

In 2018, Miyatake succeeded in imaging through a microscope how cells gather, grow and convert into cancer tissue on a rough-surfaced glass slide measuring 2 centimeters by 2 cm and repeated the experiment to confirm her results.

Initially, she couldn’t figure out why cells grew so smoothly on the special material. A one-year analysis revealed that the bumps on the surface offer the foundation for cells to develop into cancer tissue.

During a more detailed examination, Miyatake found a mature tumor merged with another to grow even bigger, moving around like a slug. She said she was surprised that “the minor difference on the glass surface could physically stimulate cells into forming tissue.”

When carcinoma cells killed by exposure to strong ultraviolet rays were put on the slide, tumors took in deceased cells around them, to in effect play dead, rendering it impossible for immune cells that attack cancer cells to target them.

“By donning the veil of dead cells like a zombie, tumors may be trying to evade being attacked by immune cells,” Miyatake said.

Working with a major manufacturer, Miyatake is now creating a prototype for mass production. If the cell growth observation technology is commercialized, a new anti-cancer agent might be developed, she said.

Miyatake, who majored in virus research in university, said she is inspired to “work harder” by longtime friends and scientists she first met then who are now devoting themselves to research related to the novel coronavirus.

“As someone involved in academic research, my goal is to save the lives of patients and contribute to society,” Miyatake said.