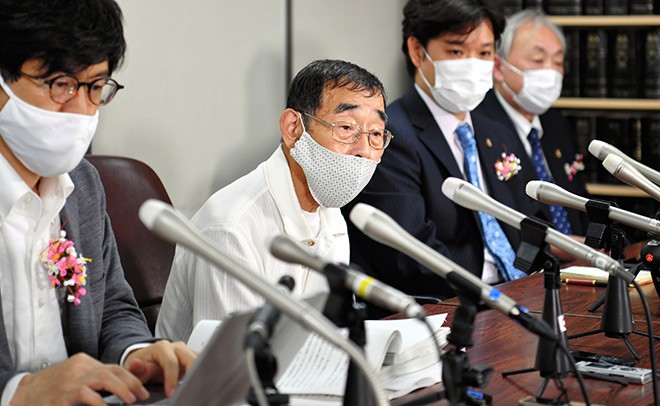 The plaintiff, second from left, and his lawyers hold a news conference on June 30 after the Tokyo District Court rejected his compensation claim. (Yosuke Fukudome)

A 77-year-old man who underwent forced sterilization when he was in junior high school found he was not entitled to compensation or even an apology from the central government after filing a lawsuit.

Ruling in the case June 30, the Tokyo District Court rejected the man’s claim for 30 million yen ($278,000) in compensation on grounds the 20-year statute of limitations for seeking damages had expired.

While the ruling took note that the man’s freedoms had been violated by the forced sterilization, it did not declare the former Eugenic Protection Law as unconstitutional.

Before the law was abolished in 1996, thousands of men and women were sterilized, often without knowing why they were forced to undergo the procedure.

Lawsuits have been filed by 24 plaintiffs in nine courts around Japan seeking compensation and an apology from the central government.

The latest ruling was considered a step back by lawyers because the Sendai District Court in May 2019 ruled the law unconstitutional even though it stopped short of awarding compensation to the two plaintiffs.

After the latest ruling, the man held a news conference in which he stated: “It is not about the money. I only wanted the central government to apologize because it did something wrong.”

The man was living in a facility for juvenile delinquents in 1957 in Miyagi Prefecture when he was taken to a medical clinic for an unspecified procedure.

It was only later that an older resident at the facility explained that he had been sterilized.

Initially, the man assumed his father had ordered the sterilization and directed his anger at him. He later learned it was government policy to order people with intellectual disabilities, mental illness or hereditary disorders to become sterilized as a way to prevent births of “inferior” offspring.

He had first thought of remaining single for the rest of his life, but he married when he was 28 at the encouragement of others. He did not tell his wife about his past until a few days before she died in May 2013.

The district court ruled that the Miyagi prefectural commission had erred in making the decision to have the man sterilized, given that he did not have any mental illness. The court went on to rule that the central government had a responsibility for compensation because it had given prefectural authorities the green light to decide on who should be sterilized.

While the court said the sterilization violated freedoms guaranteed under Article 13 of the Constitution such as the right to life, liberty, and the pursuit of happiness, it did not go so far as to rule that the former Eugenic Protection Law was unconstitutional.

On the issue of compensation, the court considered the 20-year statute of limitations and ruled that it should be considered from the time of the man’s sterilization because that was when he suffered the damage.

The court rejected arguments by the plaintiff’s lawyers that the 20-year period had not yet begun because he continues to suffer from an ability to father children.

In the June 30 news conference, Koji Niisato, a lawyer who jointly heads the group of lawyers overseeing similar lawsuits, labeled the latest ruling “a step back” from last year’s Sendai ruling because it did not address the constitutionality of the Eugenic Protection Law.

The plaintiff said he had planned to report on a victory in his lawsuit to his late wife and parents, but said he was now at a loss about what to say.

“I do not have long to live either, so I don’t want to take my suffering with me to the grave,” he said. “I will keep fighting for as long as I live.”

The man plans to appeal the ruling.

(This article was compiled from reports by Eri Niiya, Kayoko Sekiguchi, Wataru Netsu and Sokichi Kuroda.)