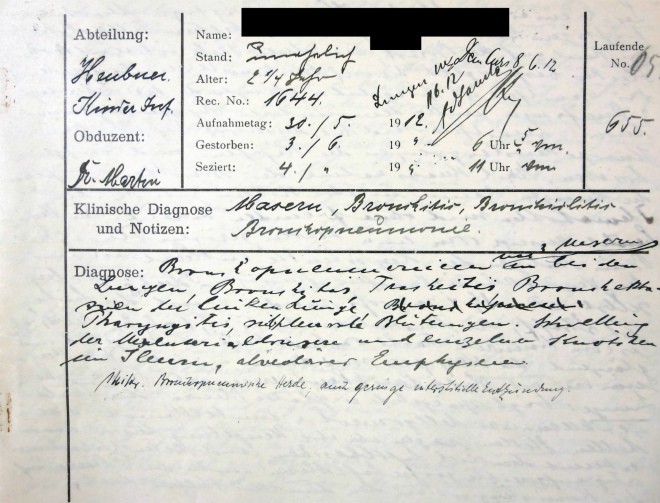 An international research team says the measles virus may have emerged as far back as some 2,500 years ago, much earlier than previously thought, and that it likely came alongside urbanization.

The experts came to that conclusion by analyzing a genome taken from a human lung preserved for more than a century.

The team, led by researchers from Germany’s Robert Koch Institute, published its findings in the journal Science on June 19.

“The measles virus may have caused epidemics in ancient times, where the cause was unknown at the time,” one of the researchers said.

The measles virus is transmitted only between humans. When exactly it emerged has been a hot topic of scientific debate. Its genetic makeup is very similar to that of a rinderpest virus, which is transmitted mainly among cows, so scientists think measles likely originated by being passed from cows or other animals to humans.

In past studies, scientists drew up a sort of family tree for the measles virus by analyzing its genetic differences from other viruses. They hypothesized the measles virus started infecting humans after separating from a common ancestor with the rinderpest virus around 1,100 years ago.

However, the genetic code used for those analyses was only obtained in the past several decades. Scientists needed a sample taken from an earlier period to make a more precise estimate of when the virus diverged from the rinderpest virus.

The researchers found a lung specimen taken from a patient who died of measles in 1912 preserved in formalin, a formaldehyde solution, at the Berlin Museum of Medical History. They then successfully sequenced the measles virus genome from it.

The researchers also obtained the genome of the virus that was collected from an old sample taken sometime around 1960 for their study. They created a family tree of the virus and found the split from the rinderpest virus could date as far back as around 2,500 years ago.

One theory suggests that a city’s population size needs to reach a certain threshold for a new infectious disease to effectively spread among humans.

The researchers studied population sizes of various large cities around 2,500 years ago. They estimate those in Western Europe and Asia had reached an urbanization threshold of 250,000 people, the minimum population size believed to be required for the measles virus to transmit between humans.

The oldest existing clinical record of measles is believed to be one written by a Persian doctor about 1,000 years ago.