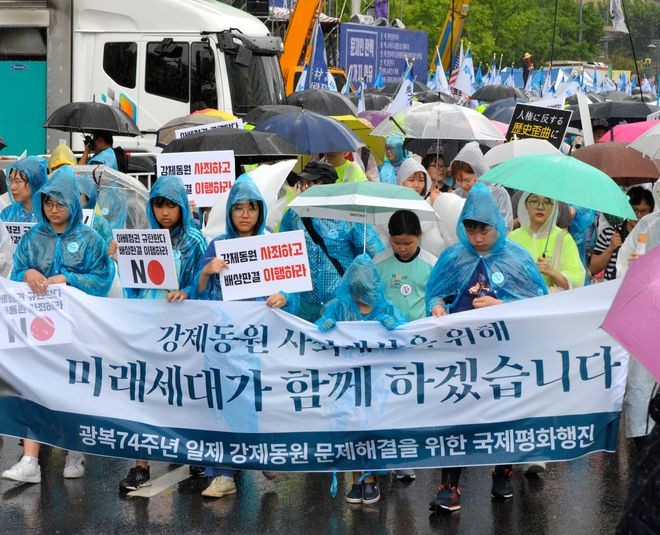 Protesters march toward the Japanese Embassy in Seoul on Aug. 15, 2019, calling for the Japanese government’s apology for the Korean wartime laborers issue. (Asahi Shimbun file photo)

When do Japan and South Korea intend to start fixing their dysfunctional political communication system to mend their deeply strained relationship that hurts the economies of both countries?

Tokyo and Seoul should start making serious efforts to settle the bilateral dispute over the issue of compensation to former Korean wartime laborers, which is at the heart of the soured ties.

While the dire state of the bilateral relations has been overshadowed by the new coronavirus pandemic, the conflict between the two governments remains as tense and bitter as ever, one year after Japan’s move last July to tighten controls on Japanese exports to South Korea.

Over the past year, the two governments have held talks during which Japan pointed out problems with South Korea’s trade management system. While South Korea has taken steps to deal with the problems, the situation has failed to improve.

Seoul recently reopened a complaint filed with the World Trade Organization over Japan’s tightened controls on technology exports to its companies.

The Japanese government has officially cited security concerns over South Korean trade control as the reason for the export curbs. But it has been clear from the beginning that there was another motive behind Japan’s move.

The action was basically intended as a reprisal against Seoul’s failure to deal with the issue of compensation to wartime Korean laborers, known as “choyoko” (drafted workers).

During the past year, the row has caused considerable damage to the business communities in both nations.

In South Korea, the movement to boycott Japanese products has forced some Japanese companies to withdraw from the market. South Korean companies have been forced to bear massive costs for replacing materials provided by Japan with domestically made ones under the government’s initiative.

The WTO may decide to establish a dispute-settling panel over South Korea’s complaint by the end of this month. It will likely take the global trade governing body several years to reach its verdict.

Allowing this futile trade dispute to linger without good reason is irresponsible. The two governments can end this harmful row only if they take truly effective steps to do so without trying to save face.

Japan, for its part, should immediately withdraw the restrictions on exports to South Korea, which should rethink its WTO complaint and start playing an active role to resolve the wartime laborer issue.

The Japanese government is poised to take retaliatory actions if that happens. That would add to the bad blood between the people of the two nations, perpetuating a conflict that neither side can win.

The South Korean government should hold direct talks with the former Korean laborers to find solutions while pledging to abide by the 1965 treaty to normalize diplomatic ties and the bilateral agreement that settled all war reparations issues as well as the official positions the successive administrations have taken on the issue.

The Japanese government should do its part by stopping sticking obstinately to the position that all war reparations issues between the two countries have been settled for good without showing any willingness to heed South Korea’s arguments.

If Japan, which ruled the Korean Peninsula for nearly four decades before the end of World War II, fails to show humble attention to history issues, it is hard to expect South Koreans to soften their attitude toward the issue.

There are many policy areas where cooperation between the two countries serves the interests of both, including not only the economy but also dealing with North Korea and the environment.

In particular, the COVID-19 pandemic has underscored the importance of the international sharing of knowledge and information in the areas of health care and epidemic prevention.

To avoid leaving this unwanted diplomatic legacy to the next generation, both governments should act swiftly to improve their chilly neighbor relationship.