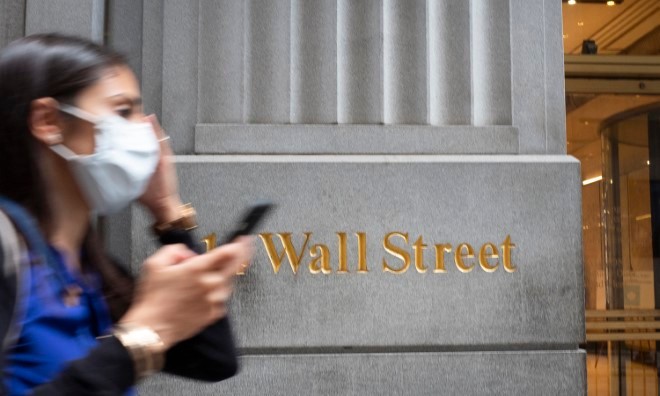 A woman wearing a mask passes a sign for Wall Street in New York on June 30 during the coronavirus pandemic. (AP Photo)

The dollar was on the defensive against more growth-sensitive currencies on Thursday, following upbeat U.S. and European economic data but renewed worries about the coronavirus blunted more aggressive risk taking.

The market sentiment gained an additional boost from the news that a COVID-19 vaccine developed by German biotech firm BioNTech and U.S. pharmaceutical giant Pfizer has shown potential and was found to be well tolerated in early-stage human trials.

Sterling traded at $1.2477, flat in early Thursday trade but having gained 1.1 percent so far this week. The Australian dollar fetched $0.6919, having gained 0.7 percent on the week.

The euro changed hands at $1.1252, maintaining its gain of 0.3 percent since the start of week.

Data for May was revised upward to show payrolls surging 3.065 million, instead of tumbling 2.76 million as previously estimated.

More closely watched jobs reports from the government, due later in the day ahead of U.S. public holiday on Friday, are expected to show an increase of 3 million non-farm payrolls in June.

There are concerns about whether the U.S. economy can sustain its recovery as coronavirus infections surge in many parts of the United States.

California dramatically rolled back efforts to reopen its economy on Wednesday, banning indoor restaurant dining in much of the state, closing bars and stepping up enforcement of social distancing and other measures as COVID-19 infections surge.

Against the yen, the dollar traded at 107.45 yen, having fallen 0.4 percent the previous day as it was unable to recover losses made in Asian trade on safe-haven bids.

“If we see further spikes in coronavirus cases, I would expect both the dollar and the yen to strengthen against other currencies,” said Tohru Sasaki, head of Japan market research at J.P. Morgan.