Huge fireball rips over Japan skies, appears to blow up

A huge fireball is seen in the sky above the Kanto region on July 2. (Provided by Kagaya) 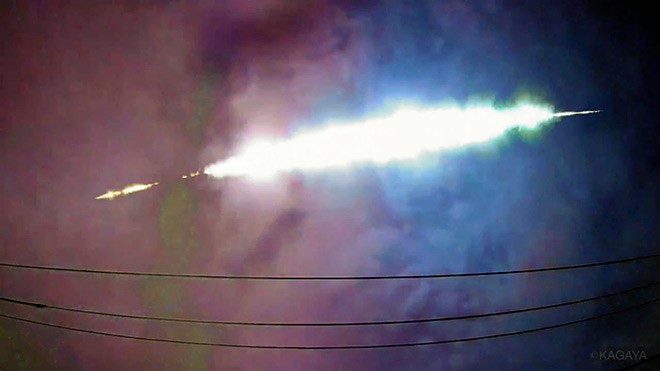 A huge fireball crosses the sky above the Kanto region at around 2:32 a.m. on July 2. (Captured from a video taken by Kagaya)

A huge fireball was seen tearing across the Kanto region sky at around 2:32 a.m. on July 2, with witnesses reporting on social media that they heard a loud explosion a few minutes later.

The accounts suggest that the sound of the explosion reached the ground, which is extremely rare in the case of an object detonating at such a height described by witnesses.

The unknown object crossed the sky from west to east and minutes later, a loud bang was heard even inside homes, according to Kagaya, who captured video of the event.

“The sound was probably related to the fireball exploding,” said the photographer and planetarium video creator. “It was like a roar, unlike anything I've ever heard before.”

The incident quickly went viral on Japanese social media, with numerous people in the Kanto region posting messages saying they heard something like a distant rumble of thunder.

At the same hour, an Asahi Shimbun camera installed at the Kiso Observatory of the University of Tokyo in Nagano Prefecture to film the night sky captured a flash resembling lightning that bathed the sky in a turquoise green light.

Shooting stars are observed when dust floating in space collides with Earth’s atmosphere. Meteorites are large shooting stars plummeting to the ground.

In 1908, an exploding meteorite mowed down forests in Siberia, Russia, several tens of kilometers in all directions. In 2013, another exploded in the sky above the Russian state of Chelyabinsk, and its shock wave shattered windowpanes of buildings, causing injuries.