Aid applications soar, while those in need given the runaround 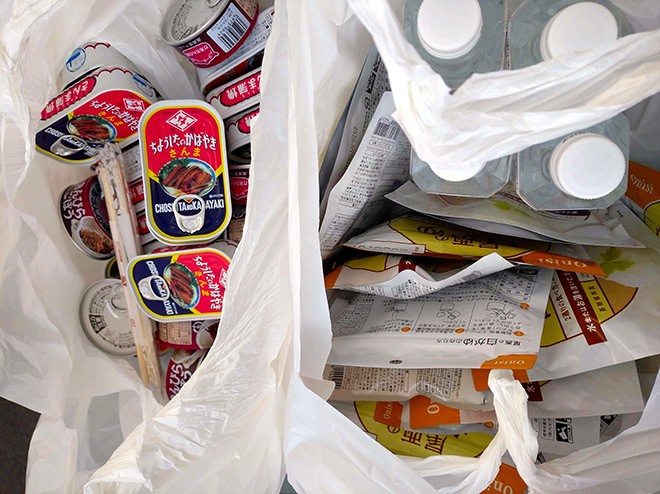 A man with only 200 yen received food items from a ward office. (Provided by Tsukuroi Tokyo Fund)

Applications for public assistance have continued increasing at an alarming rate, while many of those in need during the novel coronavirus pandemic say they are hampered by red tape and other obstacles.

The number of applications in April surged by 24.8 percent year on year to 21,486 nationwide, according to labor ministry data released on July 1. It was the sharpest increase since the ministry started conducting the monthly surveys in 2012.

The number of households that started depending on public assistance was 19,362 in April, when the nationwide state of emergency was issued to deal with the pandemic. It was an increase of 14.8 percent over the same month the previous year.

The upward trend was more notable in urban areas where novel coronavirus infections have led to business closures and job losses.

Tokyo marked a 27 percent increase in April in the number of households that started depending on public assistance. Chiba Prefecture recorded a 30.6 percent rise, while the increase in Hyogo Prefecture was 19.8 percent.

Among government-designated major cities, Sakai had the largest rise in the number of such households, at 41.2 percent, followed by Nagoya and Kyoto each with increases topping 30 percent.

In April, the overall unemployment rate was 2.6 percent, up 0.1 point from the previous month. In May, the jobless rate jumped to 2.9 percent.

The number of people who took days off work on the orders of their employers and other reasons reached 5.97 million in April, more than triple the figure in April 2019.

Many of those seeking assistance have voiced frustration over the slow process and bureaucratic runarounds, according to organizations that support the nation’s needy.

Tsukuroi Tokyo Fund, a general incorporated association that supports people with financial difficulties, held a consultation with a man in his 50s who had worked as a day laborer and slept at internet cafes in Tokyo. He lost his source of income when work opportunities dried up in the pandemic.

He applied for public assistance in late May. But a ward office official told him it would take a month to decide on whether he was eligible for the aid.

The ward office did not offer the man any money to get by. Instead, he was given instant and canned food items that had been stocked for a natural disaster and were about to expire.

A week later, staff at Tsukuroi Tokyo Fund negotiated with the ward office, and the wait time was shortened to 13 days. The man received a loan of 15,000 yen to cover living expenses until the decision on his application.

“Administrative support is just enough to keep them from starving,” a staff member said.

Tsuyoshi Inaba, 50, who heads the association, said more people who need public assistance are being turned away at consultation windows or told to go to another office.

He described the situation as an administrative “gatekeeping” effort to avoid providing more public assistance.

A woman in mid-April called a ward office’s consultation window to inquire about public assistance just after 3 p.m. on a Friday. She was told the window closes at 4 p.m. and that she would have to call again the following week.

The woman went to an office in a different ward and was told, “If you don’t have much money with you, go to a social welfare office.”

A welfare office refused to deal with her, citing office hours.

Although there is an increasing need for staff who can deal with the rise in public assistance applicants, many local governments have reduced the number of workers at consultation windows to prevent the spread of infections.

That has hindered many people’s requests to file applications, supporters said.

The labor ministry in April sent a notice to local governments telling them not to conduct any activity that could violate people’s right to apply for public assistance.

Inaba said there are people who “gave up after being turned away at a local government office and became homeless.”

(This article was written by Ryuichi Hisanaga and Haruna Ishikawa.)