Eiichi Shibusawa android unveiled at his museum in Saitama

The Eiichi Shibusawa android is shown to the media in Fukaya, Saitama Prefecture, on June 30. (Ryo Kato) 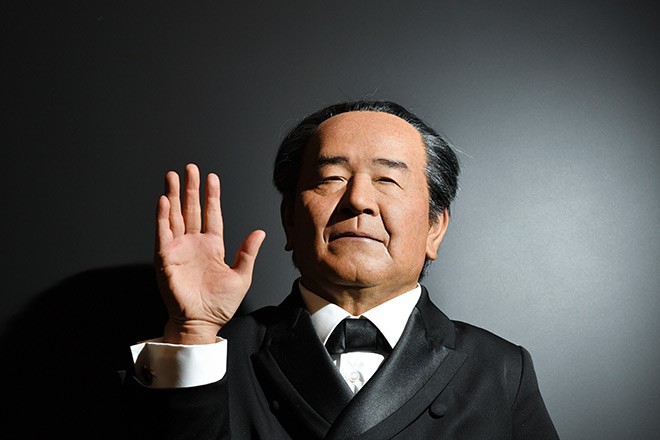 FUKAYA, Saitama Prefecture--Industrialist Eiichi Shibusawa (1840-1931), called "the father of Japanese capitalism," is back in the limelight, ahead of becoming the new face of the 10,000 yen ($93.03) bill in a few years.

The Shibusawa humanoid android was shown to the media at the Shibusawa Eiichi Memorial Museum in his home city here on June 30.

The android will start to give 20-minute lectures, such as on the “Union of the Morality of the Economy,” to visitors in the lecture room on the second floor of the museum from July 3.

Shibusawa will be featured on the new 10,000 yen bill, which will be issued starting in fiscal 2024.

Initially, the android was scheduled to be introduced on April 9, one year after the decision was made to feature him on the new bill. But due to the spread of the new coronavirus, the ceremony had been postponed.

Hiroshi Ishiguro, professor at Osaka University, who created the Natsume Soseki android in the past, supervised the production from technological aspects. Android development company A-Lab Co. manufactured the robot.

The production cost is about 82.5 million yen ($767,800), including that of another Shibusawa android. Doutor Coffee Co. founder and its honorary chairman, Hiromichi Toriba, 82, who also hails from the same city, donated the money personally.

Shibusawa in his 70s is a model for the android. The standing replica is dressed in Western clothing and its height is 153 centimeters, just like the real-life pioneering industrialist.

The android's artificial voice was created based on recordings of Shibusawa's voice. After the unveiling ceremony, the android gave a lecture for eight minutes, saying “making money and developing high morals can go together.”

As a measure to prevent the spread of the coronavirus, visitors wanting to see the android need to make reservations in advance through the Fukaya city website (http://www.city.fukaya.saitama.jp/) or call the museum.

Shibusawa in his 80s will also be a model for another seated android dressed in Japanese clothing. It is scheduled to be unveiled at the former Shibusawa residence Nakanchi near his memorial museum in spring 2022.