Iwate, with no virus cases, develops 'us vs. them' mentality 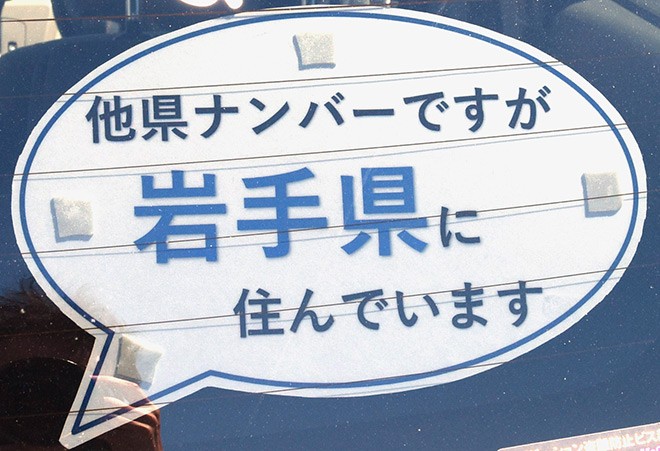 This sticker states that the driver of a vehicle with out-of-prefecture license plates resides in Iwate Prefecture. (Masakazu Honda)

Iwate Prefecture in northern Japan continues to be the only prefecture where there have been no confirmed COVID-19 infections.

But that has led to an “us vs. them” mentality among some residents there as they seek to prevent any infections.

A 49-year-old resident of Kitakami vividly remembers an encounter on May 20 at a supermarket parking lot.

The Kitakami resident just happened to be driving a car with a Tokyo license plate. The state of emergency for the novel coronavirus pandemic had been lifted for Iwate at the time, but the Japanese government’s request to residents to refrain from nonessential travel across prefectural borders was still in place.

The woman’s father, who resides in the capital, gave her the car with Tokyo plates after he decided to give up his license because he felt he was too old to continue driving.

“I never felt so frightened of other people,” the woman said, recalling the parking lot incident.

She became so afraid of using the car that she now rides a bicycle for the 30-minute trip to the supermarket.

Even after the requests about nonessential travel were lifted in mid-June, a number of vehicles in Iwate had stickers that said, “the license plate may be from out of the prefecture, but I'm an Iwate resident.”

Vehicles with license plates issued in Miyagi, Chiba and Shizuoka prefectures were seen at a shopping mall in the southern part of the prefecture. Their drivers explained that more than a year had passed since they moved to Iwate, but that they had simply forgotten to change their car registrations. One driver commuted to Iwate from neighboring Miyagi Prefecture.

In April, there were reports from other parts of Japan about drivers with out-of-prefecture license plates being harassed or having their vehicles damaged.

The town of Kanegasaki is home to about 20 companies with ties to the automobile industry. In mid-May, the town government printed up stickers for drivers with out-of-prefecture license plates that stated the individual was an Iwate resident. About 830 sets of stickers were distributed to companies and about 80 sets went to individuals.

A number of restaurants had asked the town government to do something because some regular customers who drove cars with out-of-prefecture plates said it was more difficult to frequent the establishment or to go shopping, a town government official said.

“We could not ignore residents who were facing problems or employees of companies that had been recruited to set up their base here,” one official said.

However, the Road Transport Vehicles Law has a requirement that car registrations must be changed within 15 days of moving to a new residence and carries a penalty for failing to do so.

Some police officers had informed the Kanegasaki town government that it was, in effect, encouraging people to break the law by handing out the stickers. That led to the inclusion of pamphlets urging drivers to change their car registrations.

Town officials said the stickers had been handed out without checking on the residence register or driver’s license to confirm the name and address given by the individual requesting the stickers.

A designer in the prefectural capital of Morioka created similar stickers after a friend talked about feeling worried whenever they spotted an out-of-prefecture vehicle.

The designer also thought those from outside of Iwate presented a greater risk of infection to Iwate residents, and created the stickers to alleviate concerns over cars with such plates owned by people living in the prefecture.

One official said local businesses had likely misinterpreted the request to refrain from nonessential travel.

Iwate Governor Takuya Tasso has repeatedly said that no local resident would be blamed if he or she became the prefecture’s first confirmed COVID-19 case.

At a May 15 news conference, Tasso called on local residents not to discriminate against those driving vehicles with out-of-prefecture license plates.

He repeated that message at a June 15 news conference and said, “I can understand the feeling of being afraid of becoming infected, but those living outside the prefecture are people just like those in Iwate. I want to call on everyone to cooperate in implementing measures to prevent infections.”

Psychiatrist Rika Kayama warned that the stickers might lead to new forms of discrimination.

Kayama said it was important to imagine how one would feel if they or their loved ones were the ones being rejected because of the distinction between in-prefecture and out-of-prefecture residents.

She pointed to Japan's past policy of quarantining those diagnosed with Hansen’s disease as having led to the discrimination against such patients that continues until this day.

Kayama said that attempting to investigate whether someone was from outside one’s prefecture was a clear violation of privacy and warned against using such slogans as “placing priority on life” and “a state of emergency” to legitimize actions that may be discriminatory.

(This article was written by Masakazu Honda and Natsuki Edogawa.)