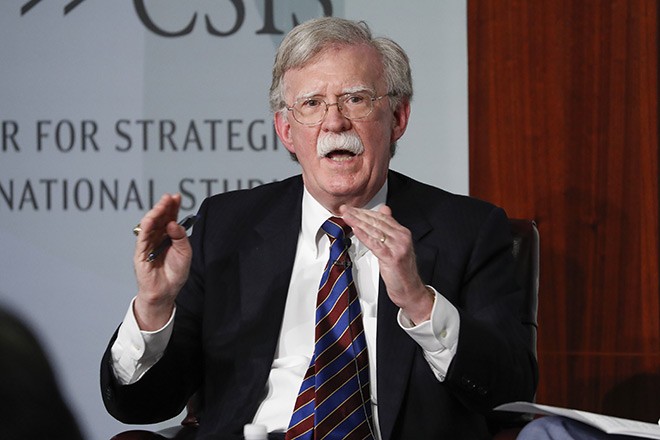 John Bolton speaks at the Center for Strategic and International Studies in Washington in September 2019. (AP file photo)

John Bolton, former national security adviser to U.S. President Donald Trump, told The Asahi Shimbun this week that he will not be voting for his erstwhile boss of nearly 18 months in the November presidential election.

I checked out the digital edition of Bolton’s just-released tell-all book, “The Room Where It Happened: A White House Memoir.”

Trump was quoted as saying, “I want to get out (of Singapore) before they do.”

According to Bolton, Trump “recounted how with the women he had dated, he never liked to have them break up with him; he always wanted to be the one doing the breaking up.”

This was typical Trump, an individual whose emotions always dictate his thoughts and deeds.

Trump loves to repeat an anecdote concerning Prime Minister Shinzo Abe. Abe’s father, Shintaro, wished to enlist in a kamikaze suicide squad toward the end of World War II and was disappointed that he never went on his mission.

Bolton ridicules Trump for his inability to see the obvious: Shinzo Abe would not have been born had his father died in the war.

Trump was dead serious when he asked if Britain was a nuclear power during a meeting with his British counterpart, Bolton says.

He writes that the U.S. president, on a separate occasion, asked his aide if Finland was part of Russia.

I covered Trump 20 years ago when the White House was way out of his reach.

He made a big splash running in the primaries, but no one treated him as a serious contender. He had no policy plans to speak of and knew nothing about diplomacy.

Now he is desperate to get re-elected.

Bolton signed a $2 million (215 million yen)-plus deal with the publisher Simon and Schuster, according to U.S. media.

I can only wonder if Bolton was unable to rein in the out-of-control president during his months in the innermost sanctum of the White House.