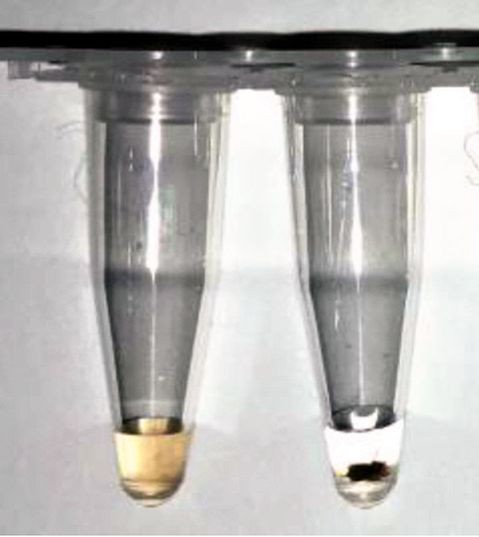 The reagent changes from brown to clear if a saliva sample of a patient infected with the new coronavirus is added. (Provided by Tokyo Medical University and Nihon University)

A safer, less invasive test to detect novel coronavirus infections by analyzing a patient's saliva has been developed in Japan that shows results within just 30 minutes.

Polymerase chain reaction (PCR) tests are commonly done to determine whether someone has the virus, but the test is invasive as it requires a swab to be inserted deep into the nose to snag a mucus sample.

Administering the test also poses a health risk to health workers as patients could cough or sneeze when the sample is being taken.

The team of scientists from Tokyo Medical University and Nihon University who jointly devised the new technique have signed a licensing contract with Osaka-based drug maker Shionogi & Co. for commercializing the new test.

“Our test is expected to be as accurate as the PCR method, and the infection risk will be lower while obtaining specimens,” said Hisashi Kawashima, a chief professor of medicine at Tokyo Medical University.

“It may also be used for developing tests for drug-resistant fungi and unknown infectious diseases.”

Under the new method, saliva and other biological samples will be examined for the virus’ RNA. If the RNA exists, tiny “magnetic beads,” which spreads in the reagent evenly, will clump together to form clusters and change the color of the reagent from brown to clear, enabling the tester to easily determine the results visually without using a dedicated detector.

Unlike the polymerase chain reaction (PCR) test, the new technique does not require RNA extraction, shortening the diagnosis time to about 30 minutes.

The researchers tested the method on 14 saliva and snivel specimens from infected individuals and found that the test results were completely consistent with those of the PCR tests.

The scientists are currently applying for a patent for the test, but equipment to simultaneously control temperatures of many specimens needs to be created for commercial application.

Shionogi on June 22 announced that it had agreed with Nihon University and other parties to share their technologies to get the test on the market.