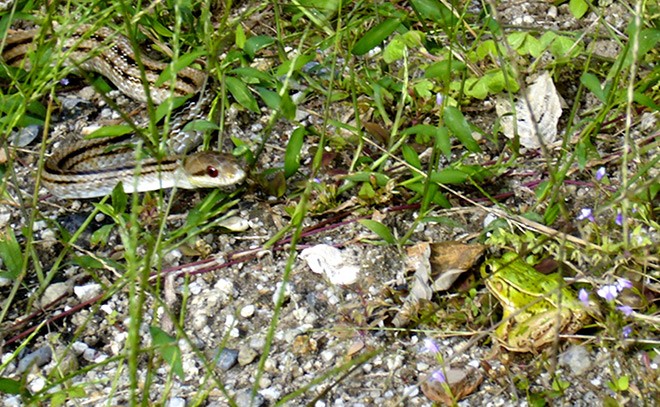 A Japanese equivalent of the English idiom “deer in the headlights” may be “hebi ni niramareta kaeru,” which literally translates as “a frog being glared at by a snake.”

The poor frog is paralyzed with terror, and its fate appears all but sealed.

But contrary to this common notion, research by zoologist Nozomi Nishiumi suggests that the frog’s seeming paralysis is a deliberate defensive posture that best ensures its survival.

Analyses of the images showed that when the frog takes a pre-emptive leap, that raises the chances of the snake correctly “reading” the frog’s next move as the frog is incapable of changing course midair.

Nishiumi believes that the frog apparently remains stock-still to wait until the snake loses its patience and attacks.

For the snake, too, being the first to move does not necessarily work in its favor.

When the reptile launches an attack, it stretches its bent body like a spring. If its first leap misses the prey, the snake needs to repeat the bend-stretch process, which takes time.

The time loss raises the odds of the frog escaping into the fields, river or pond, according to Nishiumi.

Nishiumi spent more than 300 hours on his research, in Shiga, Mie and Tokushima prefectures, as well as in the vicinity of Kyoto University, where he was in a doctorate program.

He would lurk behind a rice paddy levee with his video camera, keeping still while waiting for a snake to show up.

At one time, a local resident mistook him for a suspicious intruder and came at him with a wooden sword.

Listening to Nishiumi, I suddenly thought of the style of “tachiai” (initial charge) of yokozuna Futabayama, one of the greatest sumo wrestlers of the Showa Era (1926-1989). His ideal tachiai was to take advantage of his opponent by letting him make the first move.

I was surprised and amused to realize that the frogs share the wisdom of the great yokozuna without being taught by anyone.

This is the season when the croaking of frogs resonates around the nation.

After learning of Nishiumi’s research, I can’t help wanting to root for frogs rather than snakes.