EDITORIAL: Public naturally anxious about COVID-19 amid lack of a strategy 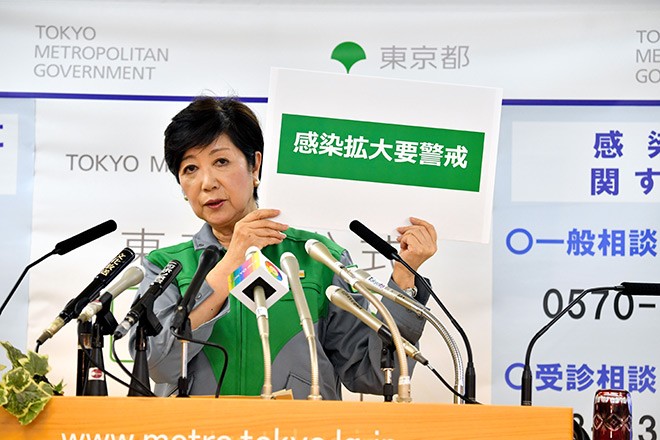 Tokyo Governor Yuriko Koike calls for vigilance against a resurgence of the new coronavirus at a news conference on July 2. (The Asahi Shimbun)

For two days in a row, Tokyo reported more than 100 new cases of the novel coronavirus, and there are signs of a spike in prefectures neighboring the capital.

Tokyo Governor Yuriko Koike said the situation requires “vigilance,” but indicated a reluctance to take stronger action, like urging businesses to close, a measure implemented from April to May.

There are some valid reasons for Koike’s cautious stance. For one, an increased number of polymerase chain reaction (PCR) tests are leading to the discovery of cases that would not otherwise have been detected.

In addition, medical institutions in Tokyo are not at risk of being overwhelmed because most new cases are said to involve only mild symptoms.

Instead of allowing our mood to be at the mercy of daily ups and downs in numbers, we should continue doing what we can to prevent infections.

But there is no denying that a vague sense of anxiety is spreading.

That is because neither the metropolitan government nor the central government has announced any clear policies or strategies for tackling this public health crisis. Their explanations about the situation have also been insufficient. The public remains uneasy and uncertain about where things are heading.

The metropolitan government stresses that infection is spreading mainly among people visiting nighttime entertainment establishments like host clubs. Actually, however, there are also many cases with no known link to a confirmed case, which account for nearly half of the total. But the metropolitan government has failed to make it clear how it will address this problem.

Tokyo now has the capacity to conduct more than 3,000 PCR tests per day. But that is far from sufficient, given the capital’s population of 14 million.

The contact-tracing smartphone application that has been introduced by the central government, which calls it crucial for responding to “clusters” of cases, did not get off to a flying start. Partly due to system glitches, the number of people who have downloaded the application is a long way from the government’s target of “60 percent of the population.”

Another reason for growing public anxiety and distrust is that the Tokyo government changed the criteria for issuing requests for business closures and voluntary restrictions on outings within a short period, and decided against issuing such requests when the criteria were met.

There is nothing wrong about changing these criteria in line with newly acquired knowledge and information. But such changes should be accompanied by detailed and convincing explanations.

The metropolitan government has done a poor job of informing citizens of the reasons for its policy changes, creating the impression that it is moving the goalposts at its convenience.

Koike issued the “Tokyo alert” in early June, but lifted it in just 10 days. The metropolitan government did not bother to conduct a postmortem to evaluate how the measure worked.

At a news conference on July 2, Koike announced a four-grade scale under which experts will assess the infection situation and the availability of medical services. Still, she did not make clear what steps would be taken if the situation is judged to require the highest level of warning.

All these facts point to the metropolitan government’s desire to avoid reinstating restrictions on economic activities. The same is true with the central government.

Yasutoshi Nishimura, the minister in charge of measures to combat the epidemic, has admitted that the government is unwilling to again declare a state of emergency. But it has yet to announce any specific plans to keep the economy open without allowing for the expansion of infections.

To be sure, this is a challenge that policymakers are confronting in all countries.

But political leaders should be declared guilty of irresponsibility if they shift the burden of making decisions to citizens. The challenge is a critical test of whether political leaders are worth their salt.

Hong Kong goods exported to U.S. to be labeled made in China