Airborne footage shows damage from flooding and landslides to the Kumamoto Prefecture municipalities of Hitoyoshi and Ashikita. (Video by Minako Yoshimoto) 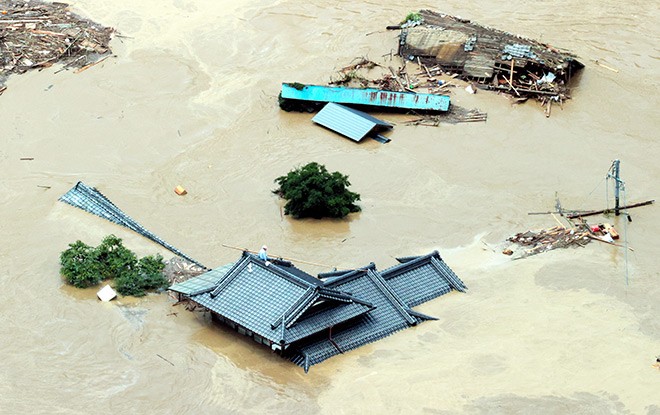 Residents of Hitoyoshi, Kumamoto Prefecture, wait on the roofs of their homes for rescue workers on July 4 as heavy rains pummeled the region. (Minako Yoshimoto)

At least 15 people in Kumamoto Prefecture were feared dead and 13 others missing as torrential rains triggered landslides and flooding across the main southern island of Kyushu on July 4.

Prefectural authorities announced at 5 p.m. that 14 residents of a retirement home in the Watari district of Kuma were showing no signs of life. Another three residents were diagnosed with hypothermia.

Earlier, Kumamoto prefectural officials said a family of three in Tsunagi was reported missing after their home was swept away by a landslide. One of them was found in a state of cardiopulmonary arrest.

The Japan Meteorological Agency issued a special warning regarding heavy rain for Kumamoto and Kagoshima prefectures at 4:50 a.m., but that was downgraded to a warning at 11:50 a.m.

The warning also targeted local communities bracing for heavy rainfall caused by a line of rain clouds stalling over the area.

Among the municipalities covered by the warning are Amakusa, Ashikita, Kuma, Uki and Yatsushiro in Kumamoto Prefecture and Isa in Kagoshima Prefecture.

Among the Kumamoto Prefecture municipalities that recorded heavy rain between midnight July 2 and 10 a.m. on July 4 were Minamata with 513 millimeters, Yunomae with 497 mm, Amakusa with 471 mm, Kuma with 470.5 mm and Yamae with 468.5 mm.

As of 9:30 a.m. on July 4, the Fire and Disaster Management Agency said the highest level 5 notice of a natural disaster in progress had been issued for a total of 38,615 residents in Kumamoto Prefecture, while a level 4 evacuation order had been issued for 76,662 residents of Kumamoto and Kagoshima prefectures.

An evacuation recommendation was issued for 167,687 residents in Kumamoto, Kagoshima and Miyazaki prefectures.

Some residents of Tsunagi were found waiting to be rescued from the roofs of their homes. Residents in Yatsushiro and Sagara were also reported to be isolated.

In Kagoshima Prefecture, the Akune city government issued an evacuation order for 4,216 residents. A road to neighboring Izumi city collapsed, rendering it unpassable.

A landslide destroyed one home in Nagashima, but the elderly woman living there evacuated in time and was unhurt. A prefectural road in Kagoshima city became unpassable due to a landslide.

The Kyushu Shinkansen Line between Kumamoto and Kagoshima-Chuo stations canceled operations from the first scheduled train on July 4, as did a number of local lines, according to officials of Kyushu Railway Co.

A task force was set up at the prime minister's office early on July 4, and Prime Minister Shinzo Abe issued instructions to make every effort to protect people's lives.

Officials said that about 10,000 Self-Defense Forces members were preparing to be sent to the Kyushu region. Ryota Takeda, the state minister in charge of disaster management, was to fly to Kyushu on July 4 for a first-hand assessment of the situation.