Deployment of Ospreys off to a bad start; too far to be effective 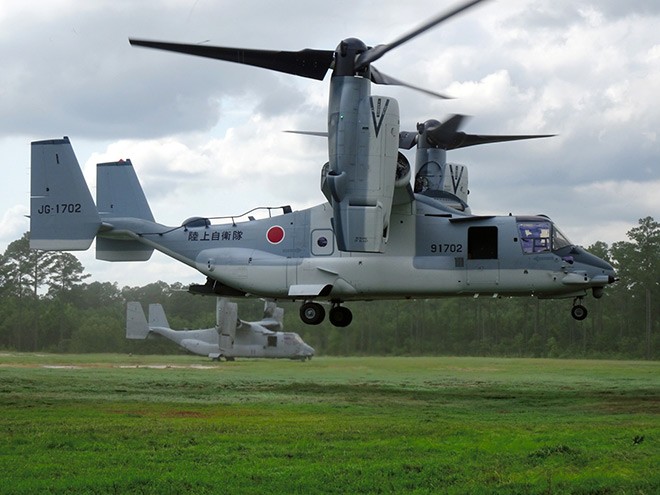 The Ground Self-Defense Force's Osprey will be deployed to Camp Kisarazu. (Provided by Defense Ministry)

The first Osprey aircraft to be deployed by the Self-Defense Forces will be provisionally stationed at Camp Kisarazu in Chiba Prefecture, close to Tokyo, but too far for them to be of any use for their intended defense role.

The deployment does not sit well with local residents due to the spotty safety record of the Osprey, now a mainstay of the U.S. military in Japan, and its history of crashes and emergency landings.

Defense Minister Taro Kono announced at a July 3 news conference that the first of the two Ospreys would be deployed to Camp Kisarazu as early as July 6.

Plans call for the eventual deployment by the SDF of 17 Ospreys.

The fixed-wing, tilt rotor aircraft are intended to transport amphibious mobile units to defend the island chain off the southwestern cost of Kyushu, the nation's main southern island.

Camp Kisarazu is located about 1,000 kilometers from those islands, which means the Ospreys will not be able to fulfill that role until agreement is reached on a closer deployment.

The Defense Ministry had planned to permanently base the Ospreys at Saga Airport in Kyushu, but local fishermen threw up numerous obstacles to the move. Discussions between the local fisheries cooperative and the Saga prefectural government remain at a standstill.

Kisarazu Mayor Yoshikuni Watanabe grudgingly agreed to the deployment of Ospreys to his city on the condition that it will be temporary and last no longer than  five years.

Watanabe pointed out that having Ospreys in his city offered zero benefit to the nation's defense capability, and made clear that his five-year deadline was the absolute limit.

He called on the Defense Ministry to assume responsibility for implementing the deployment of the Ospreys in Saga Prefecture.

However, numerous roadblocks remain to the deployment of the Ospreys to the southern prefecture.

The local fisheries cooperative has an iron-clad pollution prevention agreement with the Saga prefectural government that also contains a provision rejecting the joint use of Saga Airport by the SDF.

Saga Governor Yoshinori Yamaguchi has asked the fisheries cooperative to renegotiate the agreement, but as yet there has been no progress.

The area around Saga Airport is famed for its seaweed, highly sought after in Japan for use in various dishes, and local fishermen say they don’t trust the central government to stand up for their interests.

Individuals connected to the local fisheries cooperative also own the land on which the Defense Ministry wants to build a base next to Saga Airport. But, again, there is no telling when or if those owners will decide to sell.

A high-ranking Defense Ministry official noted that negotiations for a land deal would take time, after which, in the event of a successful outcome, even more time would be needed to construct the base.

“If this deadlock continues, it will become harder to stick to the 5-year deadline (for Kisarazu),” the official said.

If the Ospreys cannot be deployed to Saga, the amphibious unit now based in Nagasaki Prefecture would have no means of flying quickly to respond to an emergency in the southwestern island chain, which extends for about 1,200 kilometers from Yonagunijima island in Okinawa Prefecture to the Osumi islands of Kagoshima Prefecture.

Many of the islands are too small to build a runway. But Ospreys can land and take off vertically like a helicopter, making it the perfect tool to transport SDF members to far-flung places.

The amphibious unit is based at Camp Ainoura in Sasebo, Nagasaki Prefecture. Saga Airport is located about 60 kilometers away.

The amphibious unit was established in 2018, and initial plans had called for Ospreys to be deployed by the SDF the same year. But there has already been a two-year delay, and now there is no telling when the Osprey can be deployed to Saga.

(This article was compiled from reports by Nobuyuki Yoshie, Maho Fukui and Yoshitaka Ito.)