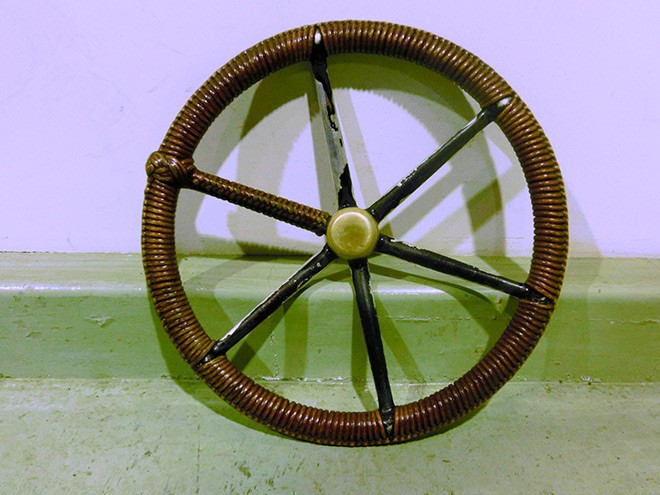 The steering wheel from a training ship of the Maritime Self-Defense Force will be one of the items offered at the July 26 Defense Ministry auction. (Provided by the Acquisition, Technology and Logistics Agency)

Strapped for funds, the Defense Ministry will auction off 30 or so items that Self-Defense Forces members no longer use. None of the items on offer serves any useful defensive purpose.

Kono will personally attend the auction to be held on July 26 within the ministry grounds in the Ichigaya district of Tokyo.

Among the items to be offered are the control stick for a transport aircraft and a belt for holding bullets.

Kono explained that there was the need for the ministry to secure funds, given the tight fiscal situation facing all government agencies.

He added that Finance Minister Taro Aso, who heads the faction within the ruling Liberal Democratic Party to which he belongs, had told him that the ministry needed to find ways to raise funds.

In the future, Kono said he anticipated an auction that would generate about 10 billion yen ($93 million) in revenue, the equivalent to one U.S.-made F-35 stealth fighter jet.

In December, Kono set up a special team to look into ways to generate more revenue.

The auction will be open to 450 participants, and a lottery will be held if there are more than that number of applicants.

Applications can be made in Japanese from the website of the Acquisition, Technology and Logistics Agency under the ministry. The deadline for applying is July 14.

Instructions in Japanese for how to apply can be found at (https://www.mod.go.jp/atla/choutatsu_seriuri/index.html).