Rest House offers a glimpse of old Hiroshima before A-bombing 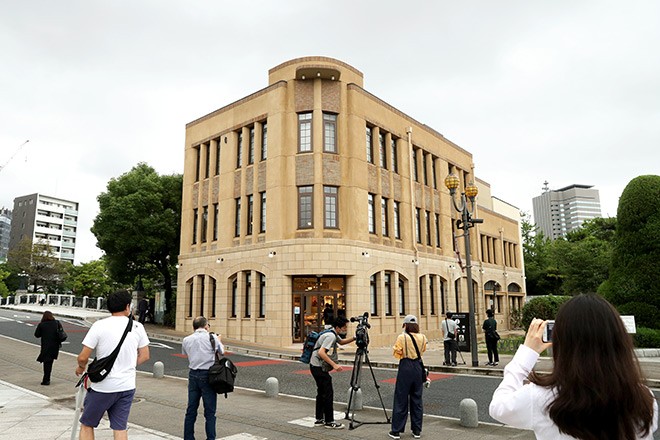 HIROSHIMA--A prewar landmark that has undergone extensive restoration now offers a glimpse of Hiroshima's cityscape prior to the atomic bombing in 1945 that nearly leveled the city and claimed tens of thousands of lives.

The reinforced concrete building with three floors and a basement, now called the Rest House, is situated in a corner of the Hiroshima Peace Memorial Park.

Located just 170 meters from ground zero, the building sustained considerable damage in the atomic bombing. With its graceful arch-shaped ground-floor windows, it now stands just as proudly as it did when the building was completed 91 years ago.

Mayor Kazumi Matsui was among local dignitaries who attended a completion ceremony on June 30 to celebrate the reopening of the landmark on July 1.

The Rest House is now used as a rest facility for visitors to the Peace Memorial Park. The city government, which owns the building, spent more than 900 million yen ($8.37 million) on the renovation work that began in December 2018.

The structure was originally built to house the Taishoya kimono shop in 1929, and was forced to close in 1943 due to a wartime textile control ordinance.

At the time of the bombing, the building served as an office by the Hiroshima prefectural fuel distribution association. The structure narrowly retained its original form. The basement remained intact, but the rest of the building was severely damaged by fire.

The city government acquired the building in 1957 and remodeled it into the Rest House in 1982. Of the 86 structures registered by the city as having survived the bombing, it is the second closest to ground zero after the skeletal-shaped Atomic Bomb Dome that symbolizes the city's destruction.

The renovation work was painstakingly carried out to recreate streetlamps on the outer walls, decorative fittings near the windows on the top floor and other original exterior details. Beams, pillars and other structural elements were retained wherever possible.

The ceiling of the first floor that was charred by the explosion, as well as a section of roof on the third floor that caved in from the blast and other parts of the building, were left as is. Visitors can view the damage through acrylic panels.

A cafe was added to the second floor to serve light refreshments, along with a piano that survived the blast. It was played by Akiko Kawamoto, who was 19 years old when she was killed in the bombing.

The former Nakajima district, which is now included in the area surrounding the memorial park, was one of the city's most prosperous downtown areas until the atomic bomb detonated on Aug. 6, 1945. The bustling district was packed with businesses, including Taishoya.

The kimono shop was depicted in the anime film "In This Corner of the World," which follows the daily life of a girl named Suzu in wartime Kure, the site of a major naval base in Hiroshima Prefecture that came under heavy attack in World War II. The building appears in one scene when a young Suzu walks in the Nakajima district.

On a sunny morning 75 years ago, the atomic bomb detonated over the city about 170 meters northeast of the building.

An exhibition area on the third floor showcases the historical background of the district and the everyday lives of the people who lived there.

"We want it to be a building that can illustrate the realities of the atomic bombing and offers an opportunity for visitors to share in the hope for peace," said Tadashi Nakata, section chief in charge of promoting hospitality at the city's tourism policy department.

Thirty-seven people were inside the building when the atomic bomb exploded.

Eizo Nomura, an employee of the prefectural fuel distribution association who was in the basement, was the sole survivor. He died in 1982 at age 84.

Set up in the basement of the renovated Rest House is an exhibition space featuring a display of Nomura's notes, drawings of scenes in the aftermath of the atomic bombing and other items. Visitors can safely access the space by elevator.

According to his notes, he was going down to the basement to pick up documents after a morning meeting when he heard a massive sound and scrambled to reach ground level.

(This article was written by Sonoko Miyazaki and Risako Miyake.)