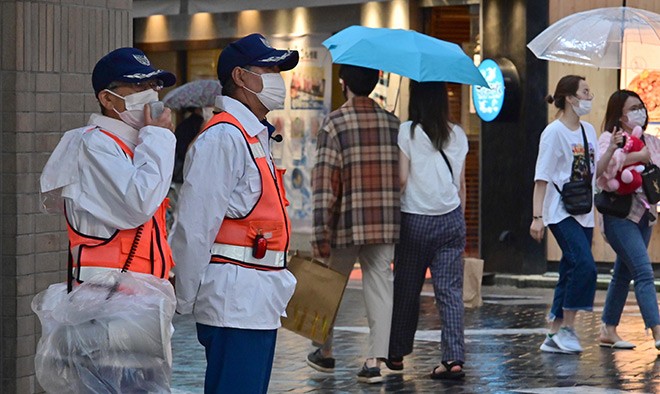 Guards working for Tokyo’s Toshima Ward call on passers-by to remain vigilant against the new coronavirus on July 3. The ward is home to Ikebukuro, where a large red-light district is located. (Hiroyuki Yamamoto)

A spike in novel coronavirus cases continued on July 4 with 274 newly confirmed infections across the country, with most occurring in the Tokyo metropolitan area, according to health officials.

In addition, neighboring Saitama, Chiba and Kanagawa prefectures also reported a combined 62 infections, fueling concerns that COVID-19 is spreading across the metropolitan area and beyond.

Elsewhere, new cases were registered after a long absence of infections.

In Niigata Prefecture, a man who lives in the prefectural capital of Niigata tested positive for the virus on July 4, the first confirmed case in the prefecture since June 18. He developed a fever and other symptoms after returning from Tokyo on June 30, where he had contact with an individual who later turned out to be a carrier as well.

In Yamagata Prefecture, a male resident of Nanyo became the first confirmed patient since May 4.

In Kagoshima Prefecture, 34 newly confirmed infections were reported on July 4. At least 30 of these were either guests or had contact with employees working at a pub where an outbreak occurred.