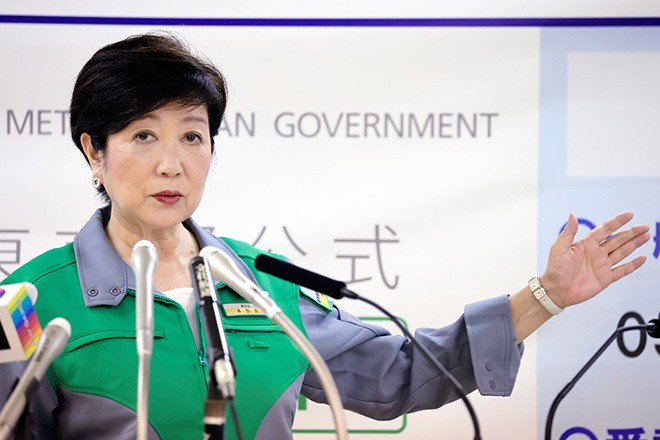 Incumbent Yuriko Koike cruised to a second four-year term in the Tokyo gubernatorial election on July 5, enjoying wide support from the ruling coalition as well as unaffiliated voters.

Her main rivals, including Kenji Utsunomiya, former chief of the Japan Federation of Bar Associations and Taro Yamamoto, head of the Reiwa Shinsengumi political party, were not close to challenging her lead.

Focusing on the metropolitan government’s response to the COVID-19 health crisis and other official duties, Koike, 67, did not deliver campaign speeches on the streets, unlike regular elections.

Instead, the capital's first woman governor appealed to voters through streaming her speeches and transmitting videos.

She underscored her record in office that she cut the number of children on the waiting list for nursery schools and enacted an ordinance reducing second-hand smoke, which is believed to be tougher than the central government’s regulations.

She also proposed the establishment of Tokyo’s equivalent of the U.S. Centers for Disease Control and Prevention as part of measures to prepare for a resurgence in the coronavirus pandemic.

As for the postponed Tokyo Olympics and Paralympics, she stuck to her guns to host the events next year while other candidates suggested that they should be either canceled or rescheduled again.

“We will proceed by streamlining the events and reducing the costs so that we will be supported by Tokyoites,” she said, defending Tokyo’s plans.

Koike, a former member of the Lower House, pressed the central government to issue a state of emergency for Tokyo over the new coronavirus outbreak.

She also made Tokyo the first of all the 47 prefectural governments to request businesses to shut down and provide them relief financial packages if they cooperated, cashing in on the metropolitan government’s ample funds.

Such steps allowed her to win support from even among unaffiliated voters, along with being effectively backed by the ruling Liberal Democratic Party and its junior coalition partner, Komeito.

In contrast, the opposition camp failed to rally behind one candidate.

But Yamamoto announced his candidacy only three days before the start of the official campaign.

As a result, voices critical of Koike were dispersed, leaving her challengers facing an uphill fight to make it a race.