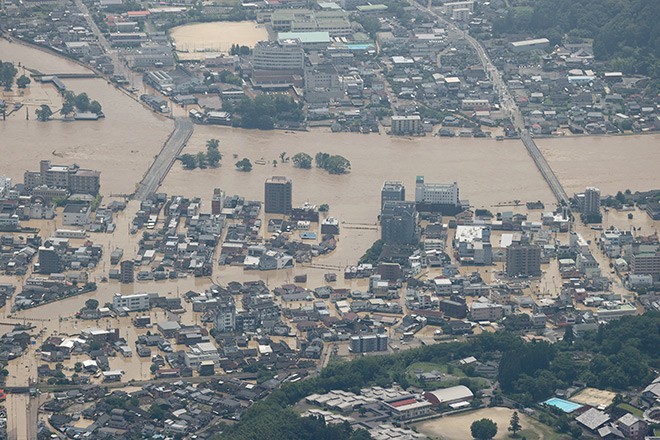 Japanese tanka poet Akiko Yosano (1878-1942) had a chance to visit Hitoyoshi, Kumamoto Prefecture, with her husband, Tekkan Yosano (1873-1935), also a poet, and enjoy a boat cruise down the Kumagawa river.

A short poem she composed then makes you feel as if you were on the boat with them.

As I read the poem, I can just imagine the grandeur of the Kumagawa river, which is described as wide as the sky between two mountains. The poet likened the beauty of the town along the river to lotus flowers on a pond.

I saw images on TV showing the Kumagawa river with the border between the broad watercourse and its bank totally invisible. Torrential rains that started the night of June 3 caused the Kumagawa river to overflow, flooding the town lying along the river.

A rash of news reports have told about missing people or others who have been found with no vital signs.

Various locations in Kumamoto Prefecture registered record amounts of rainfall. The evening edition of The Asahi Shimbun's Kyushu regional version carried a story about a local resident whose house became submerged to a depth of 2 meters in just one hour or so.

Both floods and mudslides apparently happened in an instant. There are people waiting to be rescued.

The Japanese archipelago is now feeling the brutality of rainy season, rather than its charm or gloom. Come to think of it, it was June 5, 2017, when northern parts of Kyushu were struck by torrential rain and June 6, 2018, when heavy downpours caused serious damage in wide areas in western Japan.

This is a season when huge amounts of rainfall seen only once every few decades can occur anywhere in this country and affect anybody.

Living as an evacuee is always tough. But this year, things are even harder at evacuation centers because of concerns about infection from the new coronavirus.

It is hard not to wish, although in vain, that the virus could feel sympathy for the plight of people living in areas devastated by rain.