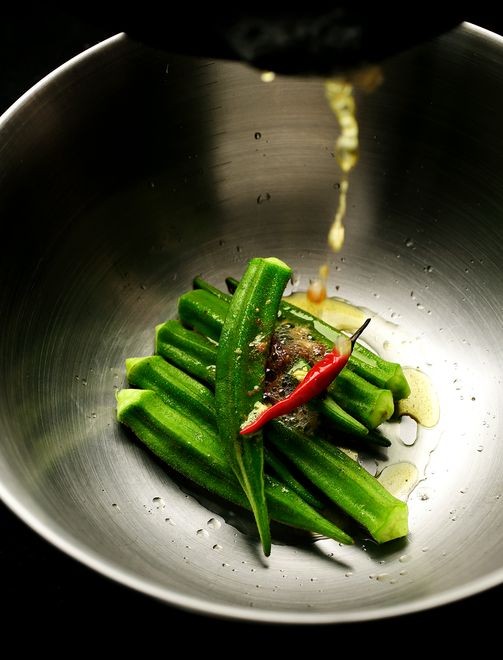 The anchovy, best-known in Japan for its use in Italian cuisine, is next in our series focusing on dishes made with savory ingredients.

In this week's recipe, we'll teach you how to turn the salt-cured little fish sold in cans or bottles into an oil-based sauce.

The process of salting and maturing seafood is the same as fish sauce such as nam pla. The sauce will expand your idea of the possibilities for using anchovies, which have a tendency to loosen in hot oil, as a tasty seasoning.

While anchovies go well with any vegetable, pairing them with okra, which is now in season, is an effortless choice that just requires boiling them whole. Bell peppers (called "papurika" in Japan) and eggplants that have been grilled and peeled are also good choices.

A key to having the dish turn out well is to finesse the anchovy's fishy smell into an appealing aroma.

The combination of anchovy with garlic becomes unrefined and bitter if they are overheated, but if you stop heating just short of this, they will cast an addictive spell.

In the arranged version of the recipe, we matched "anchovy butter" with sweet and sour tomato on toast. Enjoy it with beer or wine.

The Gohan Lab column uses "umami" written two ways for different purposes: all in hiragana, and umami, whose "mi" is written in the kanji character meaning "taste."

Umami, when written in hiragana, is a noun derived from "umai" (meaning tasty. Some say it is the origin of the word "amai," meaning sweet).

It denotes the overall tastiness felt from the flavor and smell of food and the extent of this tastiness. This week's anchovy is a savory ingredient with strong umami.

Umami, written in kanji characters, is used to represent one of the five basic tastes, along with sweetness, sourness, saltiness and bitterness. More specifically, you feel it when you taste the glutamic or inosinic acids.

Whereas sweetness signals the presence of sugar and other components for energy to power activity, components of umami are found in meat and fish and are said to signal the presence of protein that is required to bulk up the body.

About 75 kcal and 0.9 grams salt per portion

2. Squash garlic and chop. Chop anchovy (PHOTO B) as well.

3. Bring water to a boil in pot, add salt to achieve 1 percent salt concentration (10 grams salt per liter water). Add okras, remove after about 10 seconds and place in bowl. They will become soft with residual heat, but if you prefer them to be softer, extend boiling time to 20 seconds.

4. In a small frying pan, add olive oil and part of chopped garlic and place on low heat. The pan is warm enough when it starts to sizzle. Add the rest of garlic and anchovy and heat, being careful not to burn. (PHOTO C). Move pan in circular motion. Add chili pepper when anchovy has melted and fine aroma rises.

Kuniaki Arima is the owner-chef of Passo a Passo, an Italian restaurant in Tokyo's Fukagawa.

Hiroya Kawasaki studies the science of tastiness and cooking method at Ajinomoto's Institute of Food Sciences and Technologies.

To make a handy amount of anchovy butter, have 50 grams butter, 1 anchovy fillet and 1/2 small clove of garlic, both finely chopped, ready. Soften butter at room temperature and mix all ingredients well. Spread anchovy butter on sliced baguette and line up halved cherry tomatoes. Sprinkle a bit of sugar on tomato and heat in a toaster oven.

When fish die, enzymes found in the guts and muscles activate and "self-digestion," where the protein in the muscles are broken down, begins. While inosinic acid that is an umami component of raw fish diminishes, glutamic acid is created in large amounts through the breaking down process and umami is greatly enhanced. Anchovies are matured for a long period by making use of the process.