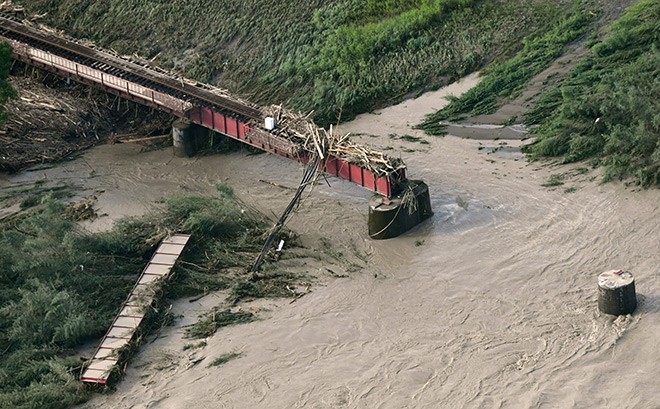 The bridge used by Kumagawa Railway over the Kumagawa river in Kumamoto Prefecture was washed away on July 4. (Satoru Ogawa)

Kumagawa Railway officials were assessing the damage after torrential rain deluged Kumamoto Prefecture on July 4, washing away a railway bridge.

The railway has suspended operations and early estimates suggest it will take substantial time to repair the damage.

“I think the railway will be suspended altogether for a very long time,” said a senior prefectural official.

Kumagawa Railway, which runs between Hitoyoshi Onsen Station and Yunomae Station, is jointly owned by local governments, including the Hitoyoshi city government, and their private-sector partners.

According to the prefecture, the rail company’s five trains remained inside Hitoyoshi Onsen Station in Hitoyoshi city when the heavy downpour began.

But all of them were inundated by the flooded Kumagawa river.

The No. 4 Kumagawa bridge was destroyed and drifted away, according to a report presented at the prefecture’s disaster task force meeting on July 5.

The 322-meter bridge was located between the railway’s Kawamura station and Higo Nishinomura station. It was built in 1937 and later designated as one of Japan’s cultural properties.