Amphibious bus to give tourists at dam a spy film thrill 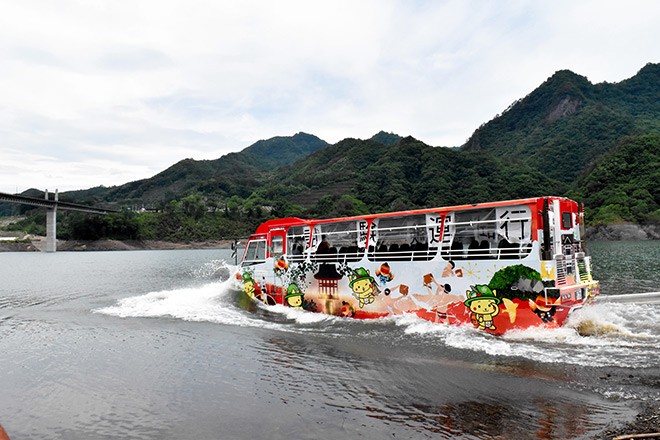 NAGANOHARA, Gunma Prefecture--In a real-life scene straight out of a spy film, an ordinary-looking tourist bus drove off a road here into a lake.

However, instead of sinking like a stone, the bus began sailing across the water as its amphibious capability kicked in.

The bus made its debut trial run on June 11 on Lake Yamba-Agatsumako here, which was completed this spring. It drove into the water with a splash from the slope of a management road in the Kawarayu district.

Once there, it floated for a bit before the screw propeller at its rear began operating and then traveled across the lake at the speed of a bicycle.

The bus’s operator, the Japan Amphibious Vehicle Organization, a nonprofit organization, is using the trial period to check out the route the vehicle will travel and train its driver before starting commercial operation of the bus later this month.

The 42-passenger vehicle, which bears illustrations of the town's mascot and other characters on its exterior, is nicknamed Yamba Nyagaten-go.

After it starts operation, the bus will make a 4-kilometer trip to the body of the dam. Town officials are teaming up with the Kawarayu Onsen hot spring resort and other tourist attractions in the hope of revitalizing the region.