Residents of Senjuen, a home for the elderly, are rescued by boat in Kuma, Kumamoto Prefecture. Fourteen residents were discovered with no vital signs at the facility flooded by heavy rains (Nanami Watanabe) 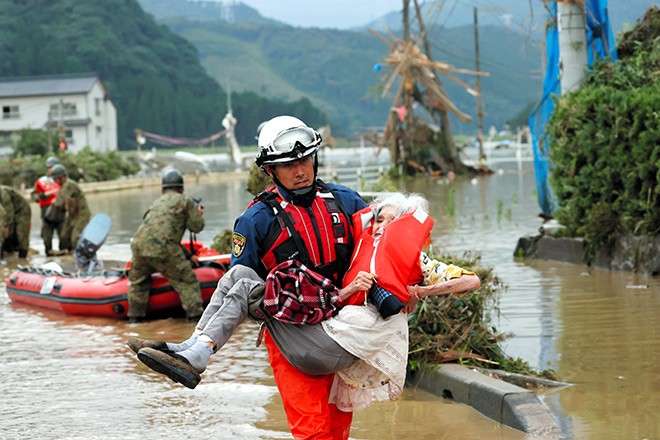 An elderly resident of the Senjuen nursing home in Kuma, Kumamoto Prefecture, is carried to safety on July 4. (Jun Kaneko)

KUMA, Kumamoto Prefecture--A male nurse on night duty at the Senjuen nursing home here who was doing the rounds around 3 a.m. on July 4 became alarmed after the pounding of relentless torrential rains suddenly turned into an ominous roar.

The facility with more than 60 residents stands near the Kumagawa river in Kuma village, Kumamoto Prefecture, and was experiencing intermittent power outages at the time because of the downpour.

Around 5 a.m., staff members checked a tributary of the Kumagawa river that flows right next to the facility. It was a heaving torrent, swollen and about to reach the height of the levees.

With no time to waste, they rushed back and began rousing the residents.

“Sorry. I know it’s still early, but the rain is looking dangerous," the nurse told his charges. "Let’s get up, OK?”

The nurse and other staff members shuffled the sleepy residents to rooms on the first and second floors.

Some worried neighborhood residents came by to check on everybody's safety and stayed with them on the first floor.

Before long, the raging water approached to the entrance of the building.

Staff rushed to assemble dining tables so they could put wheelchairs on top of them to give residents a space to sit in safety after lifting them from the floor into position.

The water level was ankle deep.

Next, the nurse recalled hearing a crashing sound. It was that of windows breaking, and the water level was suddenly up to around his knees.

Fridges, kitchen cabinets and cooking ware were being swept away.

Many of the residents began screaming for help, but he could only assist those close to him.

Wheelchairs that had been on the tables started to float around. The nurse grabbed two with his hands, even as the muddy stream came up around his neck.

He lifted two residents by their underarms to get them above the water. By then, their lips were turning purple.

The nurse involuntary swallowed mouthfuls of mucky water, but still he held on. But then, his hands and legs were becoming numb and he lost strength.

“I’m sorry,” he said in an anguished cry as he lost his grip on the residents. The situation was so chaotic, he didn't see what happened to them next.

“I wanted to help them, but I couldn’t. I just didn’t have any strength left,” the man recalled.

He barely survived himself, as he grabbed at walls and held onto curtains to stop being swept away.

By then, it was simply a struggle for survival and the nurse could not pay attention to others on the first floor.

His own home was flooded to roof level by the rains and flooding, and its contents were washed away.

Fourteen residents at the nursing home were found in cardiac or respiratory arrest.

“I don’t think it was anybody’s fault,” the staff member said. “I’m just so very sorry that I couldn’t help them.”

The Kumagawa river, the third longest in Kyushu, is prone to flooding, hence its nickname, "the unruly river.”

Many of the local communities where residents perished or were listed as missing during the latest torrential rains are situated along the course of the Kumagawa river, which cuts right through Kuma village.

The land ministry estimated that around 1,060 hectares of land and 6,100 households along the course of the river were inundated by the rains.

According to an estimate by the ministry’s Geospatial Information Authority of Japan, the depth of flooding in an area of the Watari district of Kuma village, where Senjuen is located, reached 9 meters, the deepest of all the flooded areas.

An observation point in Watari recorded a water level of 4 meters at 1 a.m. on July 4.

At that point, the observation station stopped working.